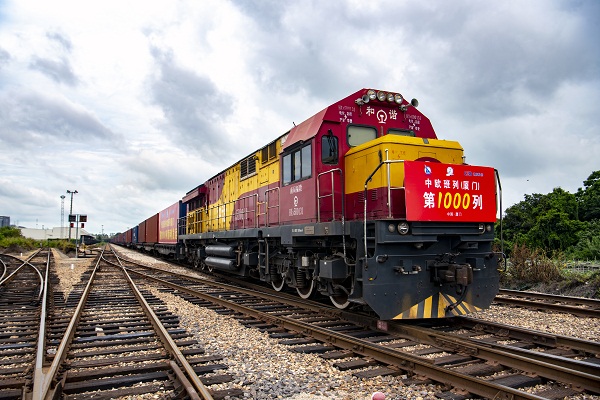 A total of 4,630 new foreign-funded enterprises have been added, and nearly 40 percent of the province's new foreign capital has been introduced.

A group of Fortune 500 companies such as Shell, Amazon and ABB have settled in the zone.

As of the end of June, a total of 251 foreign investment companies have been filed in the zone, with an agreed investment of $5.24 billion.

Among them, the China-Europe (Xiamen) route became the first railway to join the China-EU safe and intelligent trade route pilot program.

Chen Luchao, business manager of Xiamen International Express, said: "In the context of the global fight against the epidemic, the China-Europe Express has become a safeguard for Sino-European trade and smooth international cooperation in the transportation of anti-epidemic materials. It guarantees a smooth flow of international supply chains and industrial chains."

To promote the expansion and strengthening of key platforms, the Fuzhou Internet of Things Industrial Base has formed IoT applications and supported industrial clusters such as smart home, smart transportation, smart pipe network, and internet-connected vehicles. It has gathered more than 200 core companies in the IoT sector.

In 2020, the output value of the IoT industry reached some 65 billion yuan in Fujian, an increase of 85.7 percent year-on-year.