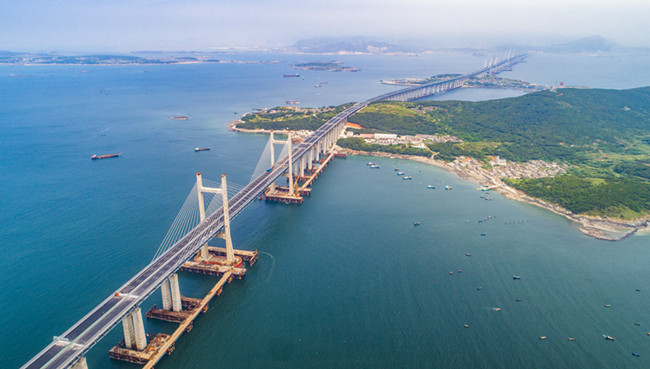 The Pingtan Cross-Straits Road-Rail Bridge, the first cross-sea rail and road bridge on the Fuzhou-Pingtan railway, opens to the public in December. [Photo provided to chinadaily.com.cn]

The coastal province of Fujian made remarkable progress in the construction of transportation infrastructure during the 13th Five-Year Plan (2016-2020), with a number of major transport projects being completed, local news reported on Jan 14.

Statistics show that another 265 kilometers of railways opened to traffic, 468 km of expressways were built, and the province's harbor capacity saw an increase of 17.19 million metric tons last year.

In 2020, more than 5,000 km of railways were either under construction or already operating, expressways exceeded 6,000 km in length, and cargo throughput at Fujian's ports surpassed the 600 million-metric-ton milestone, while container throughput surpassed 17 million twenty-foot equivalent units.

Fujian has ramped up efforts to develop rural roads and build a smoother and more efficient rural transportation network during the 14th Five-Year Plan (2021-2025) period. Local authorities have said that the province is making efforts to upgrade its highway network and ensure that 80 percent of its rural townships have access to highways by the end of this year.

Subways in Fujian also developed rapidly over the past five years, and it was the first province in China to have bullet trains operating in all nine of districts and cities.

In addition, Fujian's airports had a total passenger throughput of 50 million in 2020, and the construction of the new Xiamen Airport and  Fuzhou Airport received national approval.