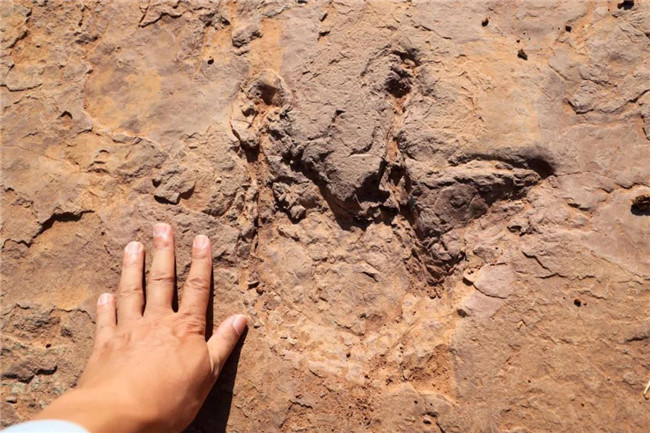 A scientist shows one of the fossilized dinosaur footprints discovered in Shanghang county, Longyan, Fujian province. [Photo provided to chinadaily.com.cn]

A total of 240 fossilized dinosaur footprints dating back about 80 million years were found in a village in East China's Fujian province, according to a news conference held in the capital city of Fuzhou, Fujian on Jan 12.

The site where the footprints were found is located in Shanghang county in Longyan, Fujian and measures about 1,600 square meters.

This is the first time traces of dinosaur activity have been found in the province.

According to experts, the fossilized dinosaur footprints date back to the late Cretaceous period, about 145 to 66 million years ago.

Scientists said that the discovery is of great value to the study of the paleo-environment, paleogeography and paleo-ecology of the late Cretaceous period, as well as the distribution and evolution of the dinosaur fauna during this period.

Huang Qinghui, vice-mayor of Longyan, said that the city will step up efforts to protect the site.

Statistics show that fossilized dinosaur footprints have been discovered in many provinces in China, including Sichuan, Yunnan, Shaanxi, Hebei and Henan.