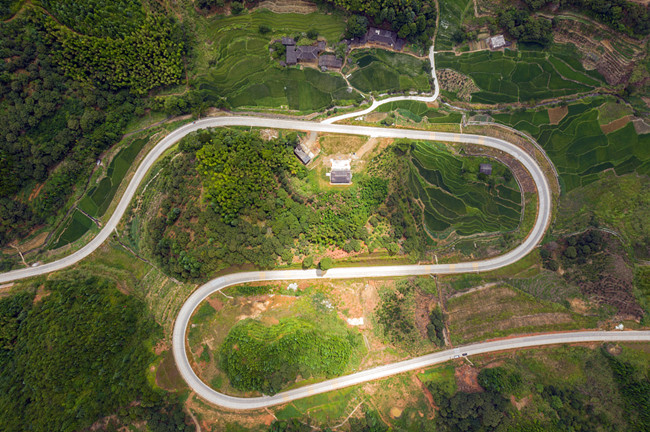 East China's Fujian province has upgraded its rural transportation networks as part of the 13th Five-Year Plan (2016-2020), with more than 1,300 kilometers of new road built to facilitate trade, rural tourism, and industrial development, according to a local news report.

Statistics show that a total of 200 comprehensive service stations for rural transportation were built in Fujian, and that all counties in the province have established a logistics center to enhance rural logistics services.

Dingwuling, an ancient Hakka village with a history of more than 800 years, is nestled among the mountains of Changting County in the city of Longyan. It was once a remote place unknown to the outside world due to poor transportation infrastructure.

However, a 6.5-meter-wide road has now been built there, and the ancient village has become a popular tourism destination. Many people visit the village every year to admire its traditional charm.

"We received 19,071 visitors during the last National Day Golden Week holiday, which generated a total of nearly 400,000 yuan ($61,747) in tourism revenue over eight days. The upgraded roads have helped us prosper, and more than 200,000 people visit Dingwuling every year, generating enormous economic benefits, with the annual per-capita disposable income of villagers reaching 17,800 yuan," according to a local official.

In recent years, Fujian has ramped up efforts to promote the integrated development of rural roads and build a smoother and more efficient rural transportation network during the 14th Five-Year Plan (2021-2025) period. Local authorities have said that the province is making efforts to upgrade its highway network and ensure that 80 percent of its rural townships have access to highways by the end of this year.