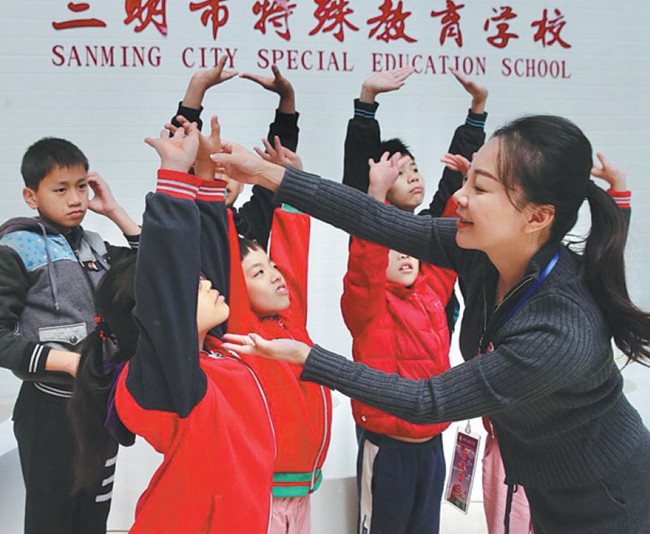 In October, Li Qin, principal of Sanming Special Education School in Fujian province, was reunited with students he started teaching in 1992 who all have hearing difficulties.

Both the former students and Li shared many touching moments that day. When Li and four other teachers entered a room reserved for their reunion, the lights were turned on and several graduates presented them with bouquets.

The students had prepared a cake and were wearing T-shirts that marked the 20th anniversary of their graduation.

When it opened 28 years ago, the school offered nine years of compulsory education to hearing and visually impaired students. In 2006, the period was extended to 12 years to include technical education.

"I didn't expect all the graduates would gather together after so many years, let alone the surprises they prepared," Li said. "The most joyful thing about being a teacher at a special school is to see students make a living on their own and all of them living good lives."

A supermarket owner, baker, car painter, art teacher and garment factory worker were among the graduates.

Before the school opened, Li traveled to dozens of villages in 12 counties of Sanming to persuade the parents of children with hearing or vision difficulties to send them to the education facility.

"The promising futures that I painted for the parents of those children has came true," Li said.

According to Li, due to their impoverished situations, most of the parents of the rural families wouldn't pay 30 yuan ($4.64) a month for meals, although the school provided free accommodations for the students. They would simply say that education made no difference to their children's futures.

The children might as well stay at home and help with chores, as all they had to do was add a pair of chopsticks for every meal, the parents told Li.

"It was a tough task to enroll enough students for our school back then," Li said. "The other three teachers and I had to explain over and over to the parents that educated children could not only take care of themselves better, but even support the family."

In May 1992, the school took its first enrollments with the oldest student 14 and the youngest 8.

Li, who became school principal in 2015, taught them Mandarin, painting, sports and ethics due to the shortage of teachers.

He said the most difficult course was ethics as it was harder to instill a sense of right and wrong in students with visual and hearing impairment.

For example, some of his students picked oranges from trees on private property near the school and gave them to teachers and classmates. Li told them this was wrong, but they did not seem to understand.

"Besides explaining to them in sign language, I needed to show them that other people were angry with their behavior and would blame them," he said.

Li, 48, said he wanted to become a teacher because he thought it was a respected occupation.

After graduating from middle school and taking an entrance exam, Li gained admission to Quanzhou Normal University in Fujian province, as a special education major.

During the early years of his teaching career; however, he didn't feel respected.

"Back in the 1990s, it was common for children with hearing and vision difficulties to be considered inferior without a promising future. Some people unfamiliar with special education even thought that teachers had hearing difficulties too," he said.

Li was wary of telling people where he worked for fear of being treated differently.

However, it was his students' ability to learn new subjects as well as their talent for arts and crafts that shored up his confidence in them.

"Their good performances in technical skills competitions, including tailoring and making handicrafts, gave me the confidence to help them improve and change people's attitudes toward them," he said, adding he is determined his students are seen as happy, positive and independent.

As of June, 25 of the school's graduates had gained admission to universities including Changchun University in Changchun, Jilin province, and Henan University of Chinese Medicine in Zhengzhou, Henan province.

The other 389 graduates have all found jobs or started businesses, according to Li.