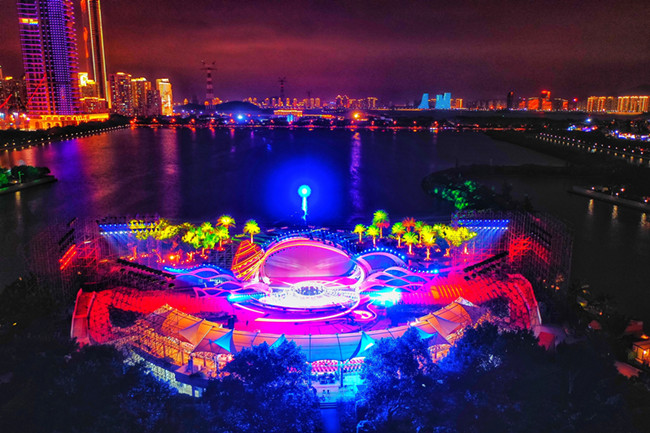 The opening ceremony of the 33rd Golden Rooster Awards film festival is held in the coastal city of Xiamen, East China's Fujian province on Nov 25. [Photo/CFP]

The opening ceremony of the 33rd Golden Rooster Awards film festival, a major event in the Chinese film industry, was held in the coastal city of Xiamen, East China's Fujian province on Nov 25.

Wang Ning, governor of Fujian, said that this year marks the 40th anniversary of the establishment of the Xiamen Special Economic Zone, and the annual film festival is a great way to promote the development of Xiamen's culture and art industry.

Hu Xiaohan, an official from the China Federation of Literary and Art Circles, said that the film industry was hit hard by the COVID-19 outbreak earlier this year. With the epidemic waning, however, film and teleplay crews have been rushing to resume production. Statistics show that China's box office had exceeded 15 billion yuan ($2.28 billion) as of Nov 7, making it the biggest movie market in the world for the first time.

Hu added that the country will set up an innovation center for the BRICS partnership on the new industrial revolution in Xiamen, which will further open up the city to the outside world and help the Golden Rooster Awards become more professional and international.

More than 1,400 A-list stars and industry insiders took part in the festival's opening ceremony. This year's Golden Rooster Awards film festival will run for four days until Nov 28, with an array of colorful events being held such as film shows, academic activities, and award ceremonies.