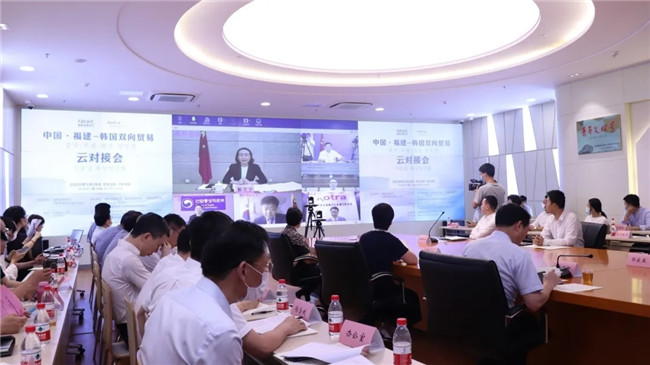 An online event revolving around product promotion, matchmaking and business negotiations between Fujian and South Korea is held on May 26. [Photo/Official Wechat account: fjswwxgzh]

An online event revolving around product promotion, matchmaking, and business negotiations between Fujian and South Korea was held on May 26. It is aimed at reviving foreign trade affected by the COVID-19 epidemic.

The event was held via online video and included two main venues in Fuzhou and Zhangzhou, East China's Fujian province. Other attendees were located in Seoul, Beijing, and Shanghai.

More than 100 enterprises from Fujian and South Korea registered for the online event, and the number of online viewers peaked at 3,000.

The event, organized by the Fujian Provincial Department of Commerce and the Korea Trade-investment Promotion Agency, offered a platform for both sides to promote their unique products and advocate Fujian's policies in fields such as foreign trade, cross-border e-commerce, and finance.

Fujian is currently doubling down on efforts to revive the economy as the epidemic subsides, and the province plans to offer more market access to South Korean enterprises, according to Guo Ningning, vice-governor of Fujian.