Organic tea is a natural cup of delight in Fujian 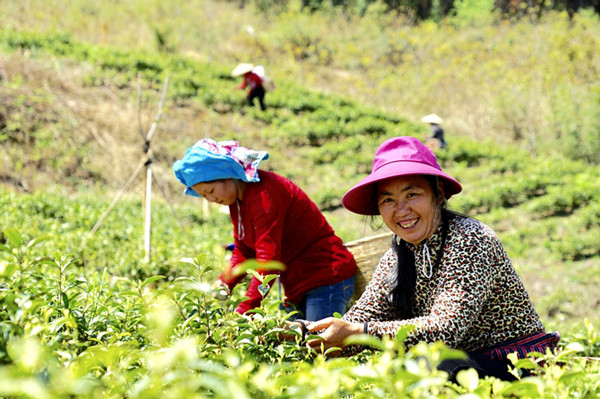 Under the soft sunbeams in early summer, farmers are busy plucking tender leaves at a tea garden in the tranquil ravines of the lush Wuyi mountains in East China's Fujian province.

A month ago, the verdant scenery was replaced by a sea of golden rapeseed flowers as swarms of bees and butterflies flew around. The flowers are planted with the tea bushes, not for their seeds, which yield oil, but as a source of green manure and natural insect repellent, says Yang Wenchun, owner of the 21-hectare garden.

Yang, who learned to grow and process Wuyi rock tea at the age of 17, once grew the tea plants in a conventional way－by using chemical fertilizers and pesticides.

His business quickly expanded as Wuyi rock tea, a special oolong variety with a particularly roasted taste and floral and fruity aroma, became the most sought-after type of tea in the domestic market. Now he employs over 40 workers at the tea garden and a tea-processing factory which yields over 15 tons of the product every year.

But when he tried to reach high-end customers in Beijing several years ago to promote rock tea, he was turned down due to his use of chemical pesticides.

In 2018, Liao Hong, an agronomist at Fujian Agriculture and Forestry University, called him for an organic tea project that uses polyculture to enlist crops to protect each other from pests. Yang was easily persuaded to join the project and rapeseed was sown in December that year with the tea bushes.

As part of the project, when the crop is harvested and buried in the field in April, it is a rich source of phosphate and potash for the tea plants.

When the harvest season for tea leaves is over in late May, soybean is planted, which can help store nitrogen in the soil.

"Both rapeseed plants and soybean vines are appealing to insects and thus can help distract their attention from tea leaves," says Liao. "In addition, both plants are favorite habitats for the natural enemies of the pests commonly seen on tea leaves."

"Long-term use of chemical fertilizer can degrade the property of soil and inhibit biological activities of microorganisms. The new method does not only improve soil fertility but can also help kill pests," Liao says.

Liao says the initial findings of the experiment show that fertility of the tea garden continues to improve, and they have spotted insects not previously found in the area, indicating that the local biodiversity is increasing.

The yield of Yang's garden plummeted by 40 percent in the first two years of the experiment, but his tea products are sold at a considerably higher price.

"The cost of running organic tea farms is much higher as I have to hire more workers to weed and harvest crops, but it will decrease in a few years when the soil fertility improves," he says.

Yang is one of the many farmers who turned to organic farming to meet the growing demand for green food among China's burgeoning middle class.

In the city of Wuyishan, around 66.7 hectares of tea gardens have adopted Liao's method to avoid using chemical fertilizers and pesticides.

Apart from polyculture, Yang's tea farms also use physical and biological pest control methods, such as light and sex pheromone traps advocated by the local government.

"Physical methods won't kill all pests, but there's nothing to worry about as long as they are kept under control," Yang says.

In addition, more farms are working to install special devices to collect real-time data, such as temperature, humidity, soil pH value, insect types and population. Technology is helping to build smart tea farms that can provide healthier and better-quality products.

By the end of this year, the size of organic tea gardens is expected to reach 840 hectares, accounting for about 10 percent of the total in the Wuyi mountains.