The Xiamen Torch Development Zone for High Technology Industries in East China's Fujian province has speeded up scientific and technological innovation and promoted high-standard opening-up since 2012, becoming an important engine for the high-quality economic growth of the province.

During the past decade, the zone has expanded its leading industries from three to five, forming a strong force for high-quality industrial development. The industries are flat panel displays; computer and communications equipment; electricity and electric appliances; software and information services; semiconductors and integrated circuits. Their total industrial output value exceeded 300 billion yuan ($41.7 billion).

"Innovative investment attraction is the watchword of the zone to promote industrial agglomeration," the zone's administrative committee said. It has established a professional investment promotion service company and adopted a corporate operation and management mechanism.

Xiamen Tianma Optoelectronics started construction on Sept 29 of its new-type display production line at the zone, with a total investment of 33 billion yuan.

As the company's first high-generation production line specializing in small and medium-sized display devices, the project is expected to help Xiamen to build a trillion-yuan electronic information industry cluster, according to Tianma.

When completed, it will not only enhance the core competitiveness of Tianma, but attract upstream and downstream supporting companies of the industrial chain, such as glass substrates and backlight modules, to gather in Xiamen.

Since its establishment in Xiamen in 2011, Tianma has set up five enterprises in the city and invested more than 100 billion yuan in production lines.

"Flat panel display is the first industry worth 100 billion yuan in the zone. Currently, it has formed a whole industrial chain covering the upstream and downstream sectors of glass substrates, panels, modules and machines," the zone's administrative committee said.

In recent years, the zone has strived to develop new types of display by giving full play to advantage as the only national pilot of the photoelectric flat panel display industry cluster.

In 2021, among the national new industrialization demonstration bases, the zone's photoelectric display sector was awarded the highest level in development quality in an evaluation by the Ministry of Industry and Information Technology.

The ever-growing industrial clusters have given rise to new growth forces. In 2021, the computer and communication equipment industry in the zone achieved an output value of 100.66 billion yuan, a year-on-year increase of 15.1 percent, becoming the third 100-billion-yuan industrial chain among the five leading industries after the flat panel display and software and information services.

The artificial intelligence industry has gathered more than 200 enterprises, making the zone's AI level rank eighth in China. In addition to the five leading industries, the zone has also highlighted development of big data, new materials and other national emerging sectors.

The zone also has a number of companies featuring strong professional and high growth potential to serve as the main force of innovation and entrepreneurship. One of them is the AUO MegaInsight Xiamen Corp.

Founded more than a year ago, the company is the wholly owned subsidiary of AU Optronics — one of the world's largest liquid crystal display panel manufacturers. It tailors intelligent manufacturing transformation plans for production enterprises and provides them with big data analysis of the whole manufacturing process.

The company's business now involves almost every aspect of the factory operation and serves nearly 500 domestic and foreign companies.

"Enterprises are the main body of innovation, and stimulating their innovation vitality will help accelerate the commercialization of sci-tech achievements," the zone's administrative committee said.

As a national independent innovation demonstration zone and a national demonstration base of innovation and entrepreneurship, the zone over the past 10 years has always adhered to the innovation-driven spirit and tried to establish a multilevel cultivation system that covers startups, micro, small and medium-sized technology companies, city-level high-tech enterprises, national high-tech enterprises, gazelle and unicorn companies.

It has also encouraged the construction of research and development institutions, and continued to improve its services for companies. Data showed that the high-tech zone has built more than 100 innovation platforms of various types, 24 nationally registered maker spaces and five national-level incubators, covering a total area of more than 1 million square meters.

The zone has also innovated and implemented an incubation service model of "one professional incubator, one public technology service platform, one collaborative innovation institute, one industrial park, and one industrial investment fund".

Under that model, it has successfully cultivated two national professional incubators — Torch Graphene New Material and Torch Internet of Things.

In the northeastern part of Xiamen, after seven years of development and construction, the Tongxiang High-Tech City has become a new industrial hot spot, attracting a number of high-quality projects such as Hithium Energy Storage Technology and CALB.

An important player in boosting Xiamen's cross-island industrial development, Tongxiang has promoted the advanced manufacturing industries represented by new energy, new materials and flat panel display to gather outside the city's main island in the past few years.

As a core carrier for Xiamen to build an innovation base for the BRICS countries of Brazil, Russia, India, China and South Africa, the BRICS Future Innovation Park based in the third phase of Xiamen Software Park has turned into a magnet for 5G, big data, AI, digital content and cross-border e-commerce industries.

It has signed contracts for more than 30 projects since its official opening in November.

With the official launch of the BRICS Partnership Innovation Base on New Industrial Revolution in Xiamen, the high-tech zone has proactively integrated into the new development pattern of domestic and international dual circulation. It has more than 100 enterprises to carry out economic and trade exchanges with BRICS countries, which are mainly engaged in industries of flat panel display, electric appliances, semiconductors and integrated circuits.

The zone has taken creating a high-quality business environment as the key to promote its sustainable development, and continued to improve the strong ecology created by innovation and entrepreneurship. In September, for example, the zone issued a series of measures on further promoting the development of the digital economy, the first of its kind in the sector.

Guan Xuan and Liu Qing contributed to this story. 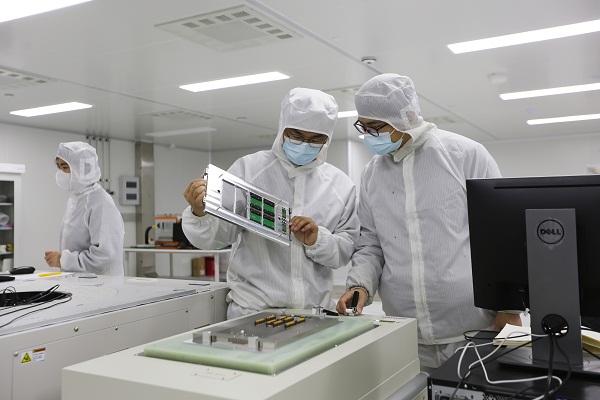 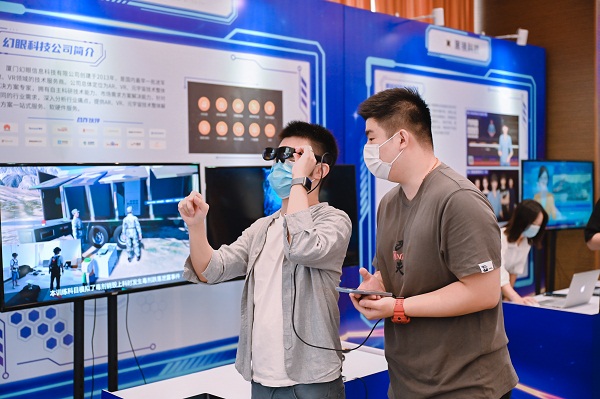 A man tries out a pair of smart glasses during a metaverse-themed activity held by the Xiamen Torch Development Zone. CHINA DAILY