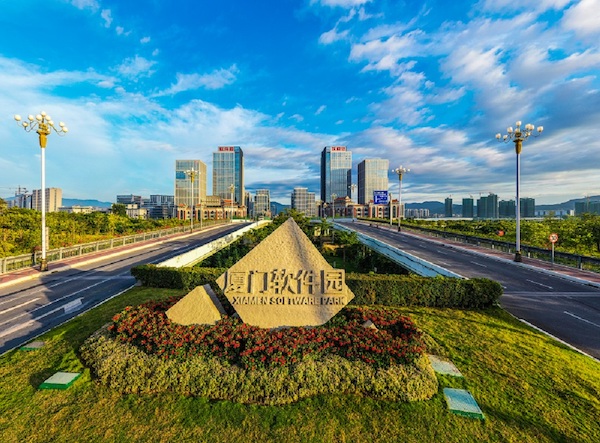 The Xiamen Software Park is home to a group of high-tech innovation businesses. [Photo by Li Chuquan/FOR CHINA DAILY]

A senior executive with the Xiamen branch of CALB, a company specializing in the design and manufacture of lithium-ion batteries and power systems, felt relieved when he was told that his child had been enrolled in a primary school in Xiamen.

Such schools have opened their arms to children of high-end talents working in Xiamen Torch Development Zone for High Technology Industries in Fujian province, which embodies the zone's attention to the needs of enterprises and talented workers.

With the help of State-owned service providers in the zone, the children of more than 300 executives now have access to education. But the support reaches even further.

"As soon as reward policies came out, we received a phone call that informed us we are qualified to apply," said a staff member with Xiamen Innovation Electronic Technology.

This year, the zone has assisted enterprises with applications for various government funds exceeding 52 million yuan ($7.53 million). It also ensured enterprises that have contributed to the zone received rewards of more than 17.68 million yuan.

To learn more about the problems facing enterprises, a State-owned entrepreneurial-centered service provider in the zone has visited more than 2,000 enterprises so far this year. As of July, it has helped reduce 413 enterprises' rents, amounting to 37.51 million yuan, and solved more than 300 problems in such fields as storage space shortage, housing for talents, and work permits.

Nobuo Ohashi, general manager of Electric Glass (Xiamen), one of the leading manufacturers and suppliers of liquid crystal glass blocks, said his company has launched four projects in the past eight years. Now it is preparing its fifth project in the zone.

"What attracted us is Xiamen's nice business environment and Xiamen Torch Development Zone's preferential policies that can back up our innovation and development," said Ohashi.

According to the investment-centered service provider in the zone, it has visited more than 700 enterprises and enabled 61 batches of expats working across 17 enterprises in the zone to start new lives in Xiamen.

For those high-tech enterprises with financial needs, another service provider in the zone－which is a national-level high-tech incubator－is lending a helping hand.

One of them is Deep Wisdom, an artificial intelligence solution provider established in 2019.

"The incubator gives us tailor-made courses ranging from qualification certification, marketing, project declaration, policies to talent recruitment. With these, we have grown into a national high-tech enterprise, and a high-growth enterprise as well as a small and medium-sized enterprise with a focus on science and technology," said an executive with Deep Wisdom.

From January to July, thanks to the incubator, seven enterprises in the zone have obtained loans of nearly 100 million yuan from banks, and more than 400 enterprises received coupons worth about 45 million yuan.

In addition, a base for overseas students and expats was set up in the zone. According to local officials, it is expats' first stop in Xiamen, offering public services, career and entrepreneurship consultation and support for other problems.