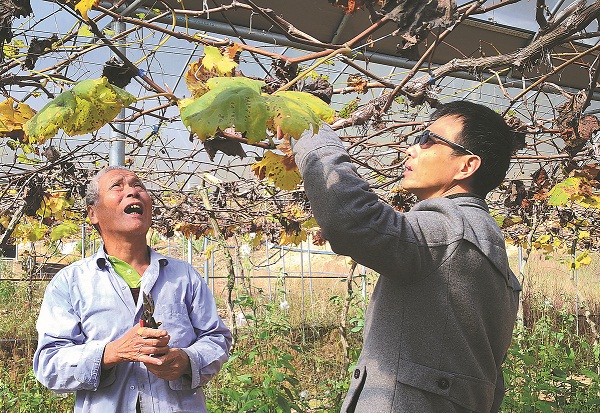 Wang Jingcai guides a farmer on how to prune vines in Nanping, Fujian province, in 2019. [Photo/CHINA DAILY]

Since the science and technology commissioner system was launched in 1999 in Nanping, Fujian province, about 13,900 experts have been dispatched to villages to help with poverty alleviation and rural vitalization.

The system aims to resolve the practical needs of small landholders by sending agricultural technicians to rural areas and providing them with techniques and services, transforming technologies into agricultural achievements in the field.

Wu Jingcai was among the first group of 225 sci-tech commissioners sent to Nanping to promote agricultural techniques, changing lives and turning around the adversity faced by smallholder farming.

Back in 1999, agricultural production in northern Fujian was hit by floods, with only grain and fruit able to be planted in the village of Xihou. The quality of the fruit and vegetables that farmers grew was poor due to their lack of professional knowledge, which resulted in low selling prices and income.

Wu was dispatched to the village after he finished his training in Germany and returned to Fujian. He started to guide the farmers in the village, teaching them by hand how to choose soil, fertilize crops and control pests. Evening sessions on agricultural sciences also provided farmers with more professional skills.

The next year, snow oranges planted by villagers were sold for 105,000 yuan ($15,200) per hectare, dramatically increasing their incomes.

As the sci-tech commissioner system was promoted in the province, Wu continued his mission in a modern agricultural technology park and was responsible for a project aiming to import excellent seed varieties and build a demonstration area.

The main task of the park was to try to plant excellent varieties from abroad, and to find the varieties suitable for the climate and soil conditions of the hills in northern Fujian.

As a technical leader, Wu conducted experimental observations in the field, counting leaves under the scorching sun during the day and busy with experimental analysis and translating seed instructions into foreign languages at night.

With his efforts, 96 of 834 imported varieties were found to fit the local conditions, including pumpkins, tomatoes and snapdragons, which have since positively affected the agricultural structure in the province.

About 11 million people had been trained through remote courses and field classes by the end of last year. The educational videos have received more than 3 million views online.

Zhang Yuanlin, head of a fruit and vegetable cooperative in Fujian's Pingnan county, always kept an eye on training on techniques related to growing fruit trees.

Members of the cooperatives would wait in front of the television to learn orchard management, Zhang said.

Chen Zhaowu, head of a rice cooperative in Pucheng county, said the guidance from agricultural technicians has greatly improved the production of rice on their farms.

The yield can increase by 6 metric tons per hectare even under bad weather conditions, he said.

"Given the mechanization during the entire farming process, we only need to take care of fertilizer and manage irrigation before harvest," he added.

A few years ago, Liao Hong became the head of a Fujian provincial science and technology commissioner team and began to explore ways to build an ecological tea farm in Wuyi Mountain.

Guided by Liao's team, farmers began to interplant rapeseed and soybeans in a tea farm in 2016, which helped fix nitrogen in the soil efficiently and provide nutrition for tea trees.

Their leaves lure insects so that the tea leaves are left safe from bites, reducing pest infestation on the tea farm.

The technicians explained the science of this method repeatedly to tea farmers as many of them doubted the effect at first.

So far, the demonstration area of ecological tea gardens in the province has reached 666.7 hectares, and more than 1,000 agricultural technicians and 2,000 farmers have been trained.

"Liao still often comes to Wuyi Mountain and patiently teaches us how to manage our tea farms. With her careful guidance in recent years, the quality of our tea and the benefits of growing tea have improved a lot, and the environment is getting better year by year," tea farmer You Pingxiu said.

In recent years, the science and technology commissioner system has been applied nationwide and has been included in the No 1 Central Document, an important indicator of policy priorities for the year, six times since 2012.