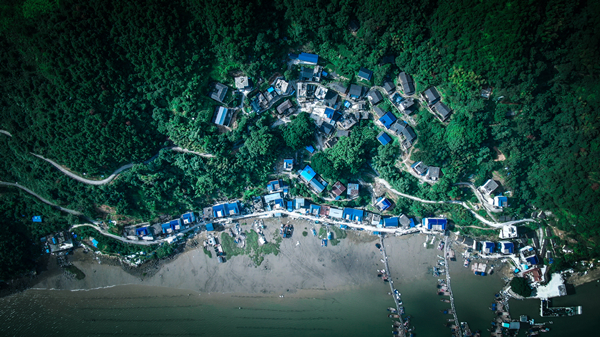 Liushuikeng village on Sandu island in Ningde, Fujian province, has been home to a small population for generations. [Photo by Ruan Chuanlong/Provided to chinadaily.com.cn]

The unique ecological profile of Liushuikeng village — a mountain on one side and the sea on the other — has allowed people to live simple, sustainable lives for generations. Whether planting commercial seaweed or fishing, they keep their faith in the sea.

There are 82 households in Liushuikeng village, located at the easternmost part of Sandu island in Ningde, Fujian province. The population is small — a little over 400.

Virtually every household is engaged in seaweed cultivation. In recent years, the market has been broad, and the output is considerable. As a mark of success, workers are even hired from other provinces.

Because of the unique geographical location, almost every family owns a boat. So far, the younger generation has been sticking around. Liushuikeng is their dream.