Mulan, the mother river of Putian, Fujian province, which used to be plagued by flooding, has been transformed into a sweet-tempered ecological corridor over the past two decades.

The winding river, which stretches from Daiyun Mountain to the Sanjiangkou estuary, features a narrow cross-section. Typhoons often make the water level in the upper reaches rise sharply in summer, and the estuary is also faced with sea water encroachment at high tide.

On average, the river used to suffer from a large flooding event every 10 years, a medium flood every four years and a small flood every year. The most serious flood occurred on Oct 9, 1999. It caused the collapse of nearly 60,000 houses and flooded 450,000 mu (30,000 hectares) of farmland. The direct economic cost amounted to 3.1 billion ($481.7 million), and the provincial government made up its mind to eradicate the problem completely.

However, it was faced with two core technical difficulties. First, cutting off the meandering route of the river would intensify water flow and increase the scouring of the riverbed. Second, the river’s lower reaches are muddy, with high water content and little solidity. Building an embankment on it would be just like trying to construct something on a piece of tofu.

Dou Guoren, a member of the Chinese Academy of Sciences and president of the Nanjing Hydraulic Research Institute, was invited to undertake the necessary scientific research to develop a physical model for an embankment on a soft foundation.

The anti-flood project on the lower reaches was completed in June 2011. In total, 15.54 kilometers of river were treated, 28.03 km of embankments were built, and 18 sluices were renovated or expanded with an investment of 1.68 billion yuan. No major flood has occurred since, an outcome benefitting nearly 1 million people living in more than 70 villages, as well as the 215,000 mu of the Xinghua Plain.

The river was named one of the 10 most beautiful hometown rivers in 2017 and recognized by the Ministry of Water Resources as a national demonstration river in 2020. 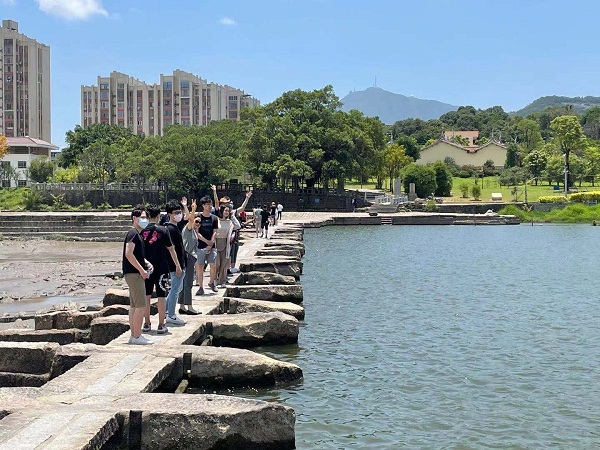 Tourists pose for a group photo at Mulanbei, a large-scale hydraulic project at the intersection of the Mulan River and Xinghua Bay. [Photo/chinadaily.com.cn]