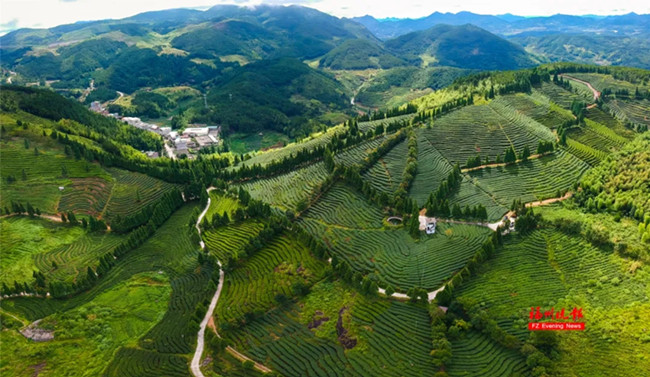 The Fujian Wenwu Xuefeng Farm, a modern agricultural park featuring tea production, is invested in by a Taiwan businessman. [Photo/fznews.com.cn]

Agricultural and forestry enterprises able to participate in rural vitalization

The Chinese mainland has rolled out measures to support the development of Taiwan-funded agricultural and forestry enterprises on the mainland to promote the integrated development of the two sides of the Taiwan Straits over the next five years.

The measures released on Wednesday cover aspects including the use of agricultural and forest land, financing and funding support, investment and business operations, research and development, innovation, and local market exploration.

Zhu Fenglian, spokeswoman for the Taiwan Affairs Office, said the measures were launched to provide equal treatment for compatriots and enterprises from Taiwan, support their participation in the high-quality development of agriculture and forestry on the mainland and promote rural vitalization.

"They will promote cross-Straits exchanges, cooperation and integrated development and improve the well-being of compatriots on both sides," she added.

The measures come amid efforts to promote the implementation of the mainland's 14th Five-Year Plan (2021-25) for development and to improve systems and policies to better protect the well-being of Taiwan compatriots and ensure that they receive equal treatment on the mainland.

Jiang Jianping, an official with the Ministry of Agriculture and Rural Affairs, said agricultural exchanges between the two sides have become increasingly close, with 15 cross-Straits pilot agricultural cooperation zones and 28 Taiwan farmer entrepreneurship parks launched on the mainland.

In addition to traditional farming, more Taiwan people are developing new forms of business in the mainland's agricultural sector, including rural tourism, processing of agricultural products and e-commerce, he said.

More than 200 people from Taiwan, including designers and architects, are involved in rural vitalization projects in 30 counties in Fujian province, the nearest mainland province to the island, Jiang said.

Zhu said the mainland's decision to suspend pineapple shipments from Taiwan this month was a standard precautionary measure to ensure agricultural production and biosecurity.

Despite the mainland informing Taiwan of the substandard quality of 28 pineapple shipments last year and reminding it to strengthen management at the source, Taiwan had not provided any feedback or rectified the situation, she said.

"Taiwan's Democratic Progressive Party authority has closed the door to solving the problem by politicizing what is actually a technical problem in a malicious attempt to smear the mainland," Zhu added.

Xinhua contributed to this story.