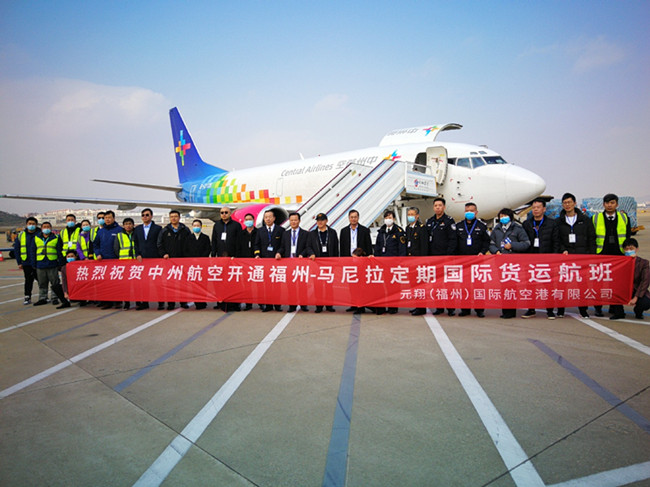 A new air cargo route from Fuzhou to Manila has opened to support frequent economic and trade exchanges and cooperation. [Photo provided to chinadaily.com.cn]

A new air cargo route was launched recently between Fuzhou, Fujian province, and Manila in the Philippines to further boost connections between the two areas.

According to the Fuzhou Foreign Affairs Office, three weekly flights will be made by Zhongzhou Airlines, departing from Fuzhou at 1 pm every Monday, Wednesday and Friday and arriving in Manila at 3:30 pm. The return flight departs Manila at 4:30 pm and arrives at Fuzhou Changle International Airport at 7:10 pm.

It is planned that a batch of epidemic prevention materials will soon take the flight to the Philippines, greatly reducing delivery time.

An important node on the 21st Century Maritime Silk Road, the Philippines is the province's largest trading partner in ASEAN. In 2019, its exports to the Philippines amounted to more than 55 billion yuan ($8.5 billion), achieving 31.5 percent growth over the previous year.

Frequent exchanges and cooperation in economy and trade helped bring about the opening of the air route. The flights are expected to further enhance mutual connectivity.