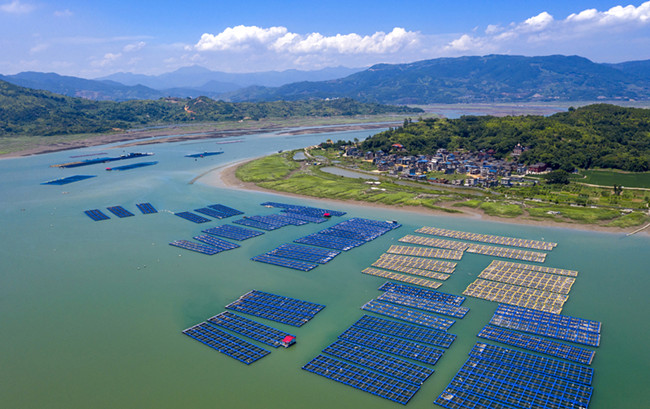 Fujian continues to develop its marine economy in an effort to build itself into a strong maritime province. [Photo provided to chinadaily.com.cn]

An ecological platform for fish breeding began operating in Lianjiang county in Fuzhou, capital of East China's Fujian province, on March 13, which is expected to accelerate the transformation and upgrading of Fujian's traditional fishing industry.

This year is the start of the 14th Five-Year Plan period (2021-25), and Fujian will continue to develop its marine economy in an effort to build itself into a strong maritime province.

The province's government work report says that this year, Fujian will promote the interconnected development of harbors, industry, and the city, and develop Fuzhou and Xiamen into national-level demonstration zones for the development of the marine economy. Efforts will also be made to bolster marine-related industries such as deep-sea farming, the seaward industry, marine biomedicine, and the comprehensive utilization of seawater.

Fujian will also construct an international shipping center in Xiamen and an international deep-water harbor in Fuzhou, and some key port areas including Dongwu, Jiangyin, Gulei, and Quanzhou will be developed.

The province plans to make full use of national-level platforms such as the Island Research Center of the Ministry of Natural Resources to build a number of innovation platforms for the collaborative development of marine industries.

Fujian's marine economy has seen steady growth over the years. According to official statistics, the total output value of its marine economy reached 1.15 trillion yuan ($177.09 billion) in 2020, ranking third in the country. The per capita net income of fishermen last year was 24,200 yuan, growing 5.27 percent year-on-year.