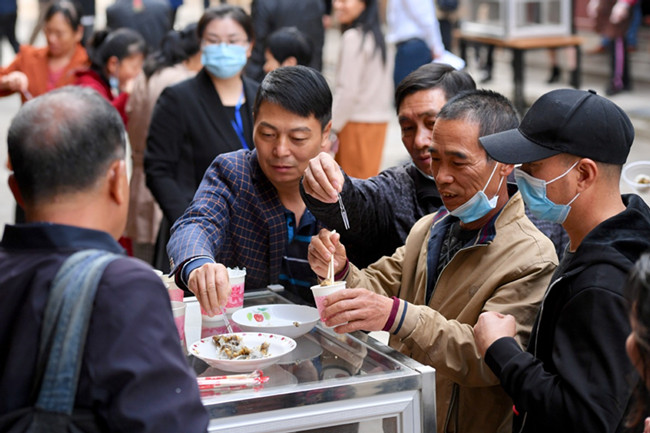 Visitors sample a variety of delicacies in the county's Yubang village. [Photo/Xinhua]

More than 200 types of delicacies from Fujian province are making mouths water not only in China but across the world.

Two of the most popular delights from Shaxian county, Sanming city, are noodles boiled in bone soup served with peanut butter, along with wontons filled with juicy meat in a sizzling soup.

Twenty years ago, Luo Guangcan, 59, from Xiamao township in the county, worked in a local shoe factory to make a living.

Now, he earns considerably more by operating five restaurants serving Shaxian delicacies in cities such as Beijing and Tianjin, as well as Tangshan and Baoding in Hebei province. He has developed these eateries since 2007, and four years ago, opened his first overseas restaurant in Singapore.

In recent years, the annual profit from his businesses has reached more than 1 million yuan ($153,000), Luo said.

"I'm planning to expand my business in Singapore, and I'm also considering opening a restaurant in Malaysia, where there are many overseas Chinese," he added.

More than 60,000 people－mostly farmers－from Shaxian county have run restaurants across China serving Shaxian food since the 1980s, when locals traveled far to set up family-run outlets.

As the number of college students, migrant workers and traders in urban areas rose in the early stages of reform and opening-up, the delicacies were welcomed for their flavors and affordable prices.

The restaurant owners, who rely on razor-thin profit margins, have gained a better standard of living by working long hours.

There are now more than 88,000 restaurants serving Shaxian delicacies nationwide, with a total turnover of over 50 billion yuan annually, according to the Shaxian Delicacies Trade Association.