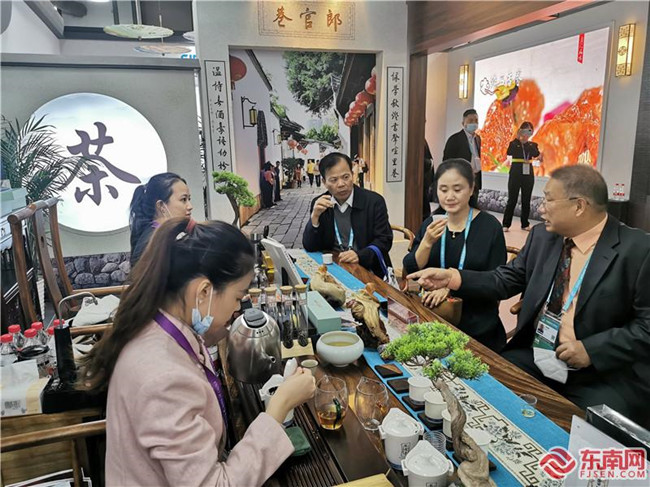 Merchants show interest in traditional tea at Fujian's booth at the third China International Import Expo, which is being held in Shanghai from Nov 5-10. [Photo by Zheng Huang/fjsen.com]

Several world-famous enterprises attending the third China International Import Expo (CIIE) said they are optimistic about the Chinese market despite the global COVID-19 pandemic. They added that they would continue to expand cooperation with East China's Fujian province.

Compared with the second CIIE, this year's expo, which runs from Nov 5-10, has improved in many aspects. The exhibition area has been expanded to 360,000 square meters, and four special exhibition zones have been added: public health and epidemic prevention, energy conservation and environmental protection, intelligent transport and sports items.

Despite the ongoing pandemic, Swedish furniture giant Ikea has continued to accelerate its expansion in China and tapped online channels for marketing, according to Ikea China's chief executive officer Anna Pawlak-Kuliga. She said that Ikea's first store in Fujian is expected to open to the public this winter.

Leo Liu, president for Asia-Pacific at Chicago-based Archer Daniels Midland Co (ADM), a US agribusiness group and first-time participant, said that China is not only one of the most important markets in the world for ADM, but also the company's innovation hub in Asia-Pacific.

Liu added that ADM's business in Fujian is operating normally, and the company is pushing forward with new investment projects in the province. ADM will continuously expand cooperation with Fujian in various fields.

Swiss industrial conglomerate ABB Group opened its manufacturing base last year in the Torch Industrial Park in Xiamen's Xiang'an district. Currently, the base serves the Chinese market and more than 60 countries and regions worldwide, according to Gu Chunyuan, chairman of ABB China.

Gu added that the group would make the Xiamen base a benchmark across the world in research and development and manufacturing, promoting the transformation and upgrading of the country's traditional industries.