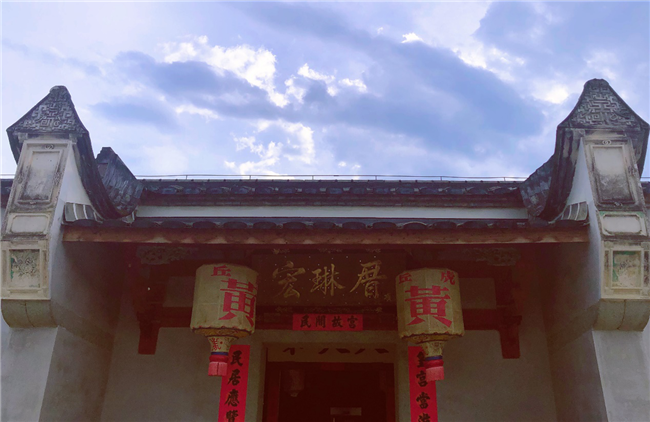 The main entrance of the restored Honglincuo, which is known as the "Folk Palace Museum" and is located in Bandong town in Minqing county, Fuzhou. [Photo by Liu Xia/chinadaily.com.cn]

As a city in China boasting a rich history and culture, Fuzhou in Fujian province possesses many relics and well-preserved ancient buildings.

Located in Bandong town of Minqing county in Fuzhou, Honglincuo (宏琳厝) is a distinctive site with an array of ancient houses that display a high-level of engineering technology and architectural art that bear the local characteristics of the city.

Badly damaged during a flood caused by a typhoon in 2016, the largest single folk residence compound in China, which is over 220 years old, completed its restoration work in January this year after receiving a 50 million yuan ($7.15 million) investment from listed real estate company Tahoe Group.

Minqing county set up a special working group for the restoration work, with government leaders participating during the whole three-year process, said Huang Wenxiu, director of the Honglincuo management committee.

We stuck to the principles of "restoring the site to its original state," looked up the historic data of the buildings, as well as solicited advice from the villagers, said the director. He added that the compound will hopefully open to visitors this year.

Huang Yuyang, 72, has witnessed the devastating flood on July 9, 2016 that impacted Honglincuo, as well as the restoration work over the past three years.

"I helped evacuate the villagers first and then joined in cleaning up the silt caused by the flood. Then with the special fund from Tahoe Group, we began fixing the buildings," said the villager.

The buildings have now been restored to their original states and we are looking forward to welcoming more tourists and making full use of the antique residence resources to boost the economy, he added.

According to Huang Yuyang, there are many things Honglincuo will provide to visitors, including the dwelling houses that are rich in history, the natural scenery around the buildings, tasty local specialties, and distinctive homestays.

In order to strengthen the protection of Fuzhou's cultural heritages, as well as promote the integration of cultural and economic development, the city of Fuzhou rolled out six policies in July last year.

In recent years, many historical and cultural blocks like Sanfang Qixiang (Three Lanes and Seven Allies) and Shangxiahang have been upgraded and launched in Fuzhou as a result of measures on the protection of ancient buildings, the improvement of people's livelihoods, as well as urban and rural construction.

Moreover, the capital city of Fujian province is now preparing for the 44th session of the World Heritage Committee, which was initially scheduled for June 29 to July 9 and then postponed due to the novel coronavirus pandemic, with a new round of ancient building protection efforts and promotion based on the characteristics of the buildings being carried out.