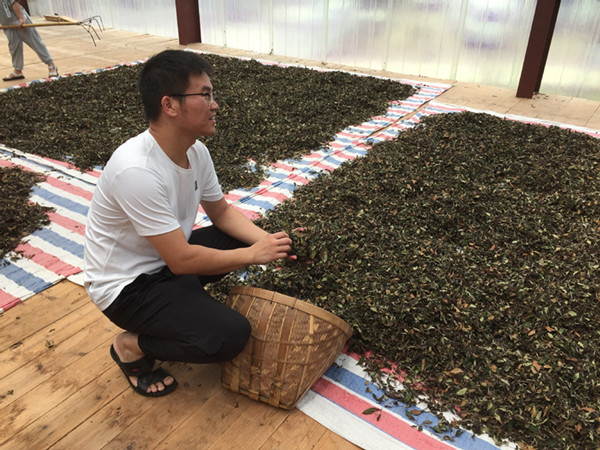 Du Ying, a villager in East China's Fujian province, is in his tea production plant. [Photo by Hu Meidong/chinadaily.com.cn]

While the COVID-19 pandemic is giving a hard blow to many companies, Du Ying, a villager in East China's Fujian province, is considering expanding investment in his white tea business.

This is another major decision that his parents do not understand after he decided to return to the village and started his own business immediately after graduating from university in 2013.

"I had tasted enough of poverty and starting a business is something I had wished to do since my sophomore year, even if it could fail," Du said.

The four-member family was still in debt of more than 30,000 yuan ($4,287) in 2013 after building a new house out of the mountains and paying college tuition for Du and his younger sister.

As the only one in Chixi who was admitted to university in 2009, the college graduate's appearance in Chixi, a formerly poverty-stricken village in Fuding city of Fujian province, attracted the attention of all villagers, and also their surprise.

"The villagers had very high expectations for me. They thought my return to the village was a waste of previous efforts," Du said.

To persuade his parents, Du even promised that if he failed in the startup, he would go to the city and find a job as a teacher as they had expected.

"After all, I had nothing to lose at that time," he said.

But he succeeded and even became a model that local villagers asked their children to follow because "he has good working ability, loves his hometown and even contributes to the village's economic development".

Starting with a total of 200,000 yuan borrowed from relatives and the bank in 2013, he now owns a company that sells white tea to a dozen of cities and provinces across the country with an annual net profit of 400,000 to 500,000 yuan.

Recalling his success, Du said he has luckily benefited from the country's preferential policies on encouraging college graduates to start their own businesses back in hometown, the development of the white tea industry, and Chixi's poverty alleviation achievements.

Now he plans to renovate his tea production plant into a standardized one with a total investment of about 1 million yuan ($143,100) this year. After the renovation, tourists to Chixi will have the opportunity to experience the procedures of making tea in his new plant.

"It's like taking a bet, but I'm optimistic about our village's future development," he said.