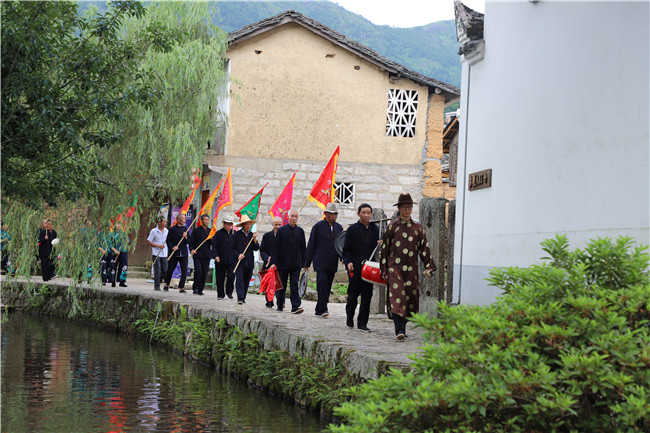 Puyuan village in Zhouning county, East China's Fujian province, held a funeral ceremony for carp, a folk custom developed about 800 years ago in the village, on July 4,2020.[Photo by Huang Qiqing/for chinadaily.com.cn]

Puyuan village in Zhouning county, East China's Fujian province, has had a folk custom of cultivating carp for more than 800 years.

A 3,000-meter brook, which is home to numerous carp, runs for about 800 meters through the village.

It is recorded that at the end of the Song Dynasty (960-1279), a family named Zheng began to cultivate carp in the village.

The village since then has formed strict rules to protect the fish in the brook and villagers have developed a folk custom to build tombs and organize funerals for those fish that die.

In the past 800 years, the villagers have developed a legendary harmony with the fish.

Currently, thousands of carp swim in the brook, creating picturesque views in the village.

Well-preserved ecology in the village helps the habitation and culture for the fish.

Since the 1980s, when unique culture tourism projects began thriving, carp culture and appreciation has made its mark on the village.

Since 2016, Zhouning county has invested up to 150 million yuan ($21.4 million) to preserve the ancient brook and renovate ancient residential architecture, as well as build a square to worship the carp and some scenic areas.

Tourists from home and abroad flock to the village to appreciate the carp. Last year, the number of tourists hit 609,600, generating combined revenue for the tourism sector of 304 million yuan.