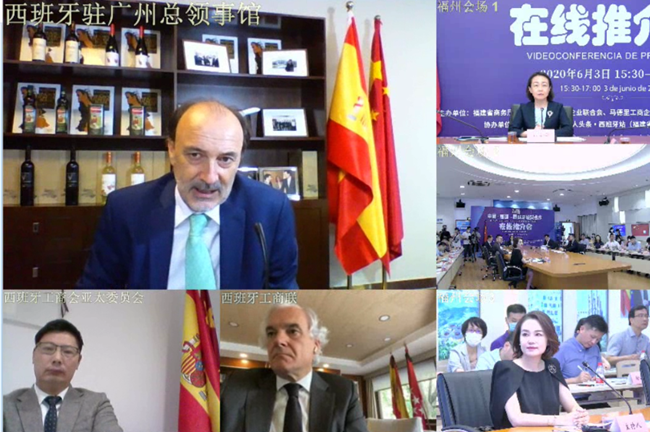 A video conference discussing how to promote economic and trade cooperation between Fujian and Spain is held on June 3. [Photo/Official WeChat account: fjswwxgzh]

East China's Fujian province held a video conference discussing how to promote economic and trade cooperation between Fujian and Spain on June 3, which gathered a number of government officials on both sides.

The online video conference included one main venue in Fuzhou and three in Guangzhou, Guangdong province, and Spain's Madrid and Barcelona.

Guo Ningning, vice-governor of Fujian, said that the economies of Fujian and Spain enjoy highl complementarity and have huge potential for cooperation in areas including chemical engineering, automobile manufacturing, information technology, food and beverages, and biotechnology.

Both sides will leverage their strengths in competitive industries in order to bring about win-win cooperation. They will deepen trade cooperation in imports and exports by taking full advantage of the China International Import Expo, domestic and international trade shows, and cross-border e-commerce platforms.

Juan Antonio Samaranch, vice-president of the International Olympic Committee, said that both sides should expand cooperation and exchange in culture, economy and trade.

According to Fujian authorities, the two sides have reached a series of economic and trade cooperation agreements in areas such as brand building and modern logistics.

At the video conference, the Spanish Consulate General in Guangzhou and the Quanzhou Municipal Bureau of Commerce launched activities to promote their characteristic products, with more than 2,000 enterprises taking part.