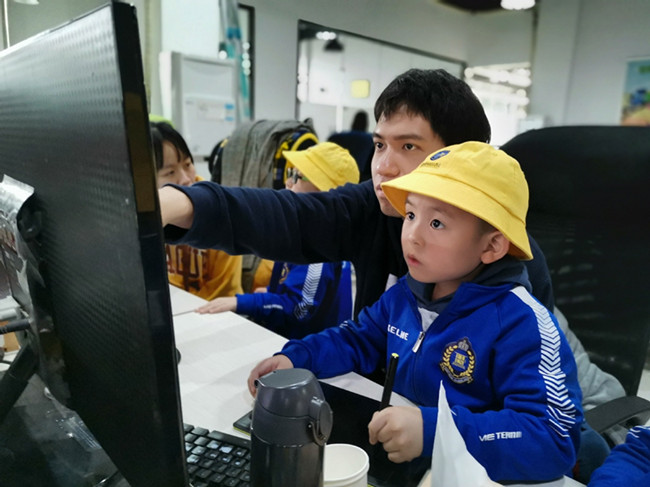 Art designers of Babybus show children how to make cartoons and explain the hand-painted board functions during a kindergarten activity in Fuzhou, Fujian province, in November 2019. [Photo provided to China Daily]

Cinemas, restaurants and various other businesses may have been hurt by the COVID-19 pandemic's fallout, but online education has received a tremendous leg-up from people confined indoors during the lockdown periods.

For instance, Babybus, a Fuzhou-based early education e-content provider, targets children under 7 years of age, and had seen its number of monthly active users stay solid at 75 million from January to March.

It's a number usually reached only during peak seasons of the year like summer and winter vacations, said Babybus co-founder Lu Xueming.

More surprisingly, up to 40 percent of the monthly active users are from overseas, mostly living in Southeast Asia and the Middle East.

The extraordinary achievement is largely attributable to the company's go-global plan initiated in 2012, just three years after Babybus' founding. The company first tested waters in two mature markets overseas: the United States and Japan. The result was quite satisfying.

To Lu, the foray into overseas markets represents natural evolution, as online solutions in the early education sector address a rigid demand from young parents.

Lu said: "Like the universal craving for ice cream among young kids, their understanding of the true, the good and the beautiful is the same, which is also what their parents ask for in early education products.

"Parents hope their kids can form good habits and learn basic knowledge such as colors or shapes with the help of playful content. In this sense, it is easier to export early education products as such content is also less difficult to localize."

Based on this understanding, Babybus has come up with more than 170 interactive applications, 2,200 nursery rhymes and animations, as well as over 2,000 audio stories, over the past eight years. With their products covering 144 countries and regions, the company's aggregate number of users worldwide had reached 400 million by the end of last year.

According to Google Play data in March, Babybus ranked seventh among apps with most downloads all over the world. Over the past three months, the educational content provided by Babybus was viewed the most by YouTube users in overseas markets like Japan, Indonesia, the Arab region and Mexico.