As of Feb 24, East China's Fujian had sent 12 teams of 1,393 medical workers to the virus-hit Hubei province, local authorities said at a news conference held in Fuzhou on Feb 24.

Among them, 1,119 medical workers were sent to Wuhan, the epicenter of the novel coronavirus outbreak in China, and another 274 were sent to Yichang in western Hubei, according to Yang Minhong, an official of the Health Commission of Fujian Province.

Yang said that Fujian medical teams, consisting of doctors, nurses, and experts on disease prevention and management, are playing an important part in Yichang’s efforts to prevent and control the epidemic.

As of Feb 20, a total of 2,555 patients infected with the novel coronavirus had received treatment from Fujian medical staff, including 114 critically-ill patients, and 239 had recovered and been discharged from hospital, according to Huang.

According to incomplete statistics, Fujian has collected thousands of pieces of medical goods and protective materials, including 110,000 surgical masks, 3,790 protective suits, 6,580 goggles, and 19,300 protective gloves.

The first Fujian medical support team left for Wuhan on Jan 27 and started serving at the Wuhan Jinyintan Hospital in Wuhan, the largest hospital for infectious diseases in the city. On Feb 24, they received a mandatory break after many long working days, and another team of 172 medical workers from Fujian took over their duties. 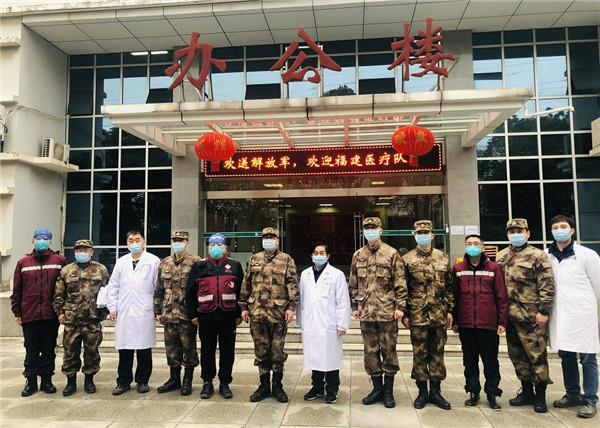 A Fujian medical team poses for a photo with doctors at the Wuhan Jinyintan Hospital. [Photo/fjydnews.com]