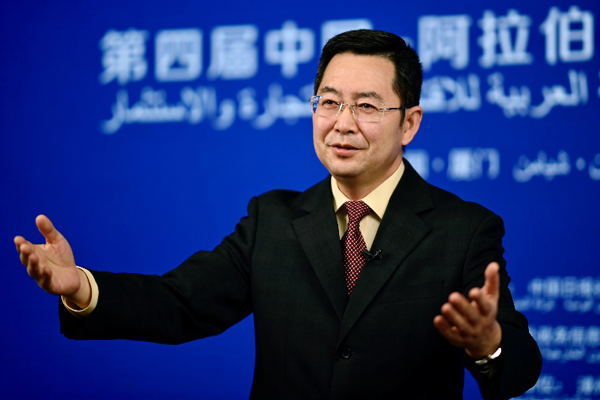 Qu Yingpu, publisher and editor-in-chief of China Daily, delivers a video speech at the summit. [Photo by Wei Xiaohao/chinadaily.com.cn]

Participants in the fourth China-Arab Trade and Investment Summit on Wednesday hailed cooperation between China and Arab nations, saying that it has displayed great vitality and resilience amid the uncertainty and instability in today's world.

At the event in Xiamen, Fujian province, they said that China-Arab cooperation will boost the high-quality development of the Belt and Road and make positive contributions to building a community with a shared future for mankind.

While delivering a video speech at the summit, Qu Yingpu, publisher and editor-in-chief of China Daily, said that from the ancient Silk Road to today's Belt and Road Initiative, China and Arab nations have never stopped learning from each other through their trade connections and people-to-people exchanges, writing a spectacular chapter in the history of human civilization.

As the national English-language newspaper, China Daily, Qu said, has been dedicated to promoting exchanges and communication between China and the rest of the world. Over the past years, it has carried out a series of cooperative efforts with Arab media and enterprises and striven to contribute to the development of ties between China and Arab nations, he added.

Qu expressed his wish that China and Arab countries would keep deepening their trade and investment cooperation, push forward the high-quality development of the Belt and Road and work together to build a China-Arab community with a shared future facing the new era.

Ali Obaid Al Dhaheri, the ambassador of the United Arab Emirates to China, said that the Arab-China connection had experienced a golden age during the 7th century, which encouraged trade to flourish and facilitated the exchange of scientific knowledge in medicines, mathematics and astronomy between the two great regions.

Despite the impact of the COVID-19 pandemic, China remained the largest trading partner of Arab states last year, with bilateral trade standing at around $330 billion, a year-on-year increase of about 37 percent, according to official statistics.

Huang Na'en, deputy director-general of the Fujian Department of Commerce, said that the province, as the birthplace of the Maritime Silk Road, has carried out close economic and trade cooperation with Arab countries in recent years, with bilateral trade increasing by 33 percent year-on-year in the first seven months of the year.

Ge Jia, executive president of China Arab TV, said the success of the summit showed that China-Arab cooperation cannot be obstructed by the virus and the Dubai-based TV channel will continue to provide a platform and services for China-Arab economic and trade cooperation.

The summit, launched in 2019 by China Arab TV, was themed "Build an Innovation-Driven Community with a Shared Future for Global Development" this year. It was jointly supervised by China Daily and the Fujian Department of Commerce, as a sideline event of the China International Fair for Investment and Trade, which officially opens on Thursday.