In the first half of this year, 3,472 cultural enterprises above designated size in Fujian province achieved 327.58 billion yuan ($47.73 billion) in operating revenue, an increase of 8.5 percent year-on-year.

For example, the provincial capital Fuzhou has enhanced its "digital Fuzhou" fame by releasing supportive policies to support the development of the film, animation and gaming industries.

Fuzhou continues to bolster its efforts to cultivate leading enterprises that specialize in digital culture. As of the end of 2021, the city has had nearly 1,000 cultural enterprises above designated size, and over half of which are related to digital culture.

In Xiamen, the film industry is thriving. The coastal city has hosted the China Golden Rooster and Hundred Flowers Film Festival for three consecutive years. To date, the Xiamen Film and TV Industry Service Center has introduced 856 film and TV enterprises.

In addition, Xiamen Software Park has been stepping up its efforts to develop sectors such as animation gaming, creative design, film and TV, news and publishing, education and training, short videos, and livestreaming. Among the settled cultural enterprises, 31 are above designated size, 16 have achieved 50 million yuan in revenue, and 10 have achieved over 100 million yuan in revenue.

Focusing on wood carving, classical furniture, gold and silver jewelry, craft oil paintings and other industries, Putian has established a batch of nationwide renowned characteristic cultural industry parks, such as the Putian Arts and Crafts City. The Huachang Cultural and Creative Industrial Park in Putian was awarded the "national cultural industry demonstration base" by the Ministry of Culture and Tourism.

The cross-Straits cultural exchange and cooperation is the key point of the development of Fujian province's cultural industry. Aiming to build a common spiritual home for Chinese people on both sides of the Taiwan Straits, Pingtan, the closest place on the Chinese mainland to Taiwan, launched projects on Sinology and has formed a forum, workshops, and cultural and creative markets about Sinology. 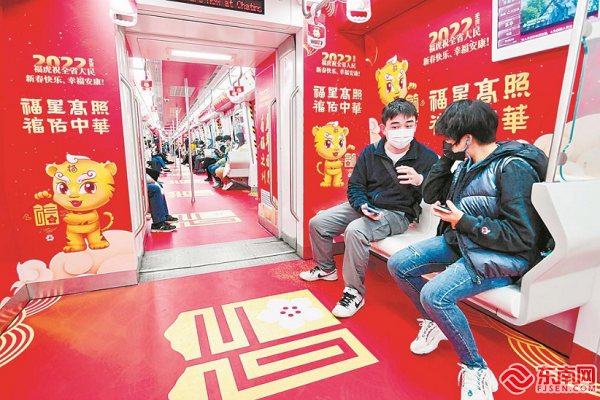 A file photo of the fu culture mascot on the Fuzhou metro. [Photo/fjsen.com]