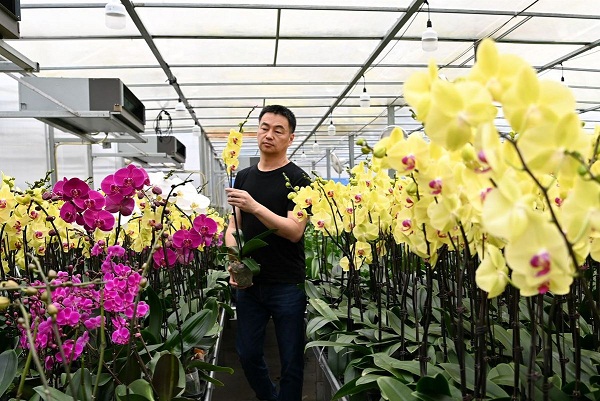 Chang Tang-wei, a Taiwan businessman based in Zhangzhou, Fujian province, tends to his butterfly orchid plantation base in April. [Photo by Zhang Jinchuan/for chinadaily.com.cn]

Businesspeople from China's Taiwan say they have confidence in investing and developing in Fujian, the closest mainland province to the island, with opportunities and policies there benefiting them.

Last year saw 1,495 new enterprises with capital from Taiwan established in the province, up 21.2 percent year-on-year. From January to May, actual utilized capital from Taiwan used in Fujian reached 5.17 billion yuan ($765.2 million), exceeding last year's total, according to data from the provincial government.

Wu, who came to the mainland in 1995, is chairman of Fabulous Group (Xiamen), a company that manufactures building materials, sanitary equipment, household appliances, integrated circuits and semiconductors.

Preferential policies on taxation, customs clearance, land use and talent recruitment are provided to Taiwan businesspeople on the mainland, Wu said, who added that the central government has done a lot to help them overcome difficulties during the epidemic period.

"Taiwan businesspeople no longer work alone on the mainland. Instead, we participate in its construction in all aspects and seek common development together," he said.

Fabulous Group has participated in infrastructure projects on the mainland in recent years, including airport and subway construction, Wu said, adding that he is expecting annual revenue growth this year of 12 to 15 percent.

There are large markets on the mainland and opportunities for Taiwan businesses, and Taiwan's economic development cannot be achieved without the mainland, he said.

"Given the mainland's development trend, policies and market potential, it's the best choice and the biggest opportunity for Taiwan businesses to invest and start their businesses on the mainland at present and in the future," Wu added.

Taiwan-funded enterprises should be encouraged to cooperate with mainland enterprises and participate in such projects as the Belt and Road Initiative and major infrastructure projects on the mainland, he said.

Kung Chun-wei, deputy manager of Kingmin Machinery, a company that produces machinery for making footwear, said it plans to further expand its business on the mainland and will recruit more professionals there.

In recent years, the company has continued to grow. Last year, its sales volume doubled that of the previous year, and the number of orders in the first half of this year is also considerable, he said.

Kingmin Machinery was established in 2008 by Kung's father at an investment zone for Taiwan businesses in Quanzhou, Fujian. It has obtained more than 30 national patents.

"We can receive subsidies for the research and development of machines, and talent from Taiwan can also get subsidized housing," Kung said, adding that his Taiwan compatriots also receive gifts during holidays.

"We can feel the kindness and care from the motherland and our compatriots on the mainland, and all kinds of policies and subsidies have made us feel welcome," he said.

Efforts should be made to help such enterprises overcome obstacles caused by the epidemic and implement tax and financial assistance policies to ensure steady investment from them, he said.

Yang Jie contributed to this story.