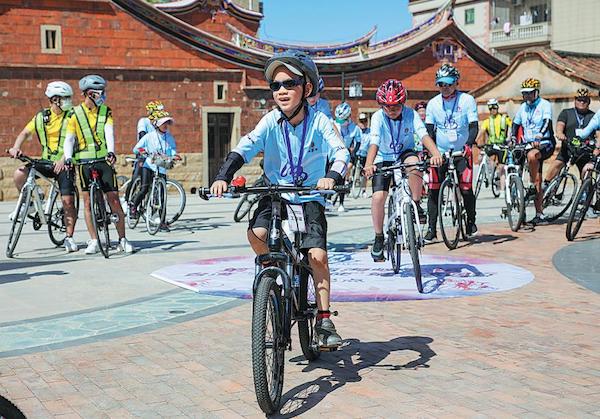 Family members of Taiwan businessmen ride bicycles while being accompanied by volunteers from both sides of the Taiwan Straits on Saturday. Their bicycle tour started from the former site of the Jinmen county government in Xiamen, Fujian province. SHEN WEI/FOR CHINA DAILY

Xi Jinping, general secretary of the Communist Party of China Central Committee, has called on young people from both sides of the Taiwan Straits to join hands in realizing the Chinese dream of national rejuvenation.

Xi made the remarks in a letter replying to young people from Taiwan attending the 20th Straits Youth Forum, which was held in Xiamen, Fujian province, from Monday to Tuesday.

He encouraged young people from Taiwan to share their experience and feelings with their peers on the island to help them get to know the mainland and jointly strive relentlessly for national rejuvenation.

The forum, launched in 2003, is an annual event focusing on the role of young people in cross-Straits exchanges and integration.

Xi said in the letter that he was delighted to learn that the young people from Taiwan had found a stage on the mainland to realize their dreams, and that they had witnessed the rapid development and changes of the motherland, and felt the warm affection between compatriots on both sides of the Straits who are of one family.

The future of the motherland and the nation rests on its young people, Xi said, adding that, as always, favorable conditions will be created for young people across the Taiwan Straits to learn from each other and provide more convenience for young people from Taiwan to study, work, start businesses and live on the mainland.

Fifty young people from Taiwan who had been invited to attend this year's Straits Youth Forum recently wrote a letter to Xi, in which they described their experiences of studying, working and living on the mainland and expressed their determination to contribute to national rejuvenation and the reunification of the motherland.

Xi's reply letter has inspired Taiwan youth on the mainland.

"Xi always pays attention to the development of young people from Taiwan on the mainland and we feel his expectations for us from the reply letter, that we should better promote cross-Straits integration and achieve common prosperity," said Fan-Chiang Feng, manager of the Qida Straits Youths Entrepreneurial and Incubation Center.

"What's more important is that, as the ones that work and live on the mainland, we should share our experiences with our family back in Taiwan to let them know the real mainland."

The youth forum is a sub-activity of the 14th Straits Forum in Fujian. Nearly 2,000 Taiwan compatriots from all walks of life attended the forum this year, which featured 43 exchange activities on various topics, including the economy, culture and youth.

Chang Shu-fu, from Taipei, Taiwan, who is participating in the forum for the second time, said: "I joined the forum in 2010, and this improved my understanding of Fujian and the mainland."

In 2015, Chang went to Pingtan in Fujian, the closest place on the mainland to Taiwan, to work for a cross-border e-commerce company. He said that, thanks to its many favorable policies, the industry has great development potential in Pingtan.

"Driven by cross-border e-commerce between Pingtan and Taiwan, there is a stable development of shipping and the logistics industry between the two sides," said Chang, whose wife also came to Pingtan from Taiwan in 2017 to work in the tourism industry.

In the future, through the forum, young people from both sides can have a deeper understanding of each other and seek cooperation, he added.

Chen Po-yuan, 23, from Taichung in Taiwan, is now studying at the Law School of Huaqiao University in Quanzhou, Fujian. He participated in the forum for the first time this year and shared his experience of creating rap songs with mainland friends.

In March, when Quanzhou was tackling a COVID-19 outbreak, he wrote a rap song with his friends with lyrics reminding people to maintain social distance and take nucleic acid tests.

They recorded a video in which they performed the song in the Minnan dialect, which is used by people in southern Fujian and Taiwan. The catchy lyrics gained a large amount of shares and views of the video online.

"When me and my local team members speak the same dialect with each other, I feel very comfortable," he said, adding that he will create more songs in the dialect and set up a start-up center in the future to help young people from Taiwan to develop on the mainland.

"I hope Xi can hear my song," Chen said. "We want to promote traditional culture through a way that our young people can more easily accept."