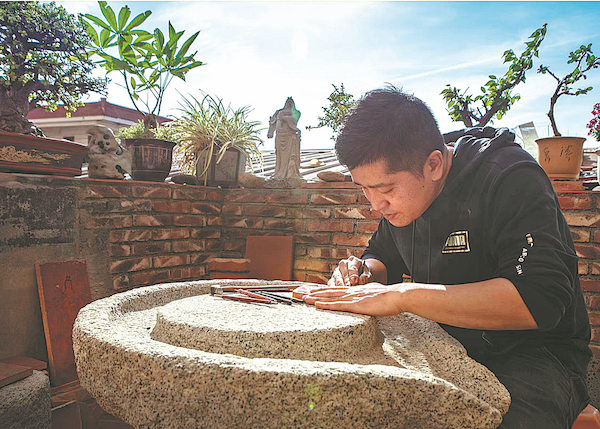 Wu Jiandong works at his home in Quanzhou, Fujian province.

The saying refers to brick carvings, which were an important feature of the old red brick buildings in the area.

The carvings, which were once commonly found on either side of the main entrance of Minnan's buildings, embellished the facade and were displays of the aesthetic taste and cultural temperament of their original owners.

Wu Jiandong said he became worried when he discovered that the tradition was on the verge of disappearing, a downward trend that has been underway for decades.

With development, the number of ancient red brick buildings has decreased, and Minnan's carvings have gradually faded from sight, the young master brick carver from Fujian's Quanzhou city said.

The 42-year-old has learned the traditional technique and now combines it with modern tastes to develop his own unique style of brick carving.

Wu said that he hoped to be able to help the traditional craft continue through innovation and by diversifying appeal.

"Market demands have changed in recent years, and so has our thinking," he told China Daily by phone. "The demand for ancient houses has decreased so, we must add modern elements and combine traditional and modern life to help pass down and develop traditional crafts."

People in Minnan love tea, so he created a series of carved brick tea decorations, including tea plates, cup holders, pot holders and other items. They have been warmly received by local residents and foreign visitors.

Earlier this year, a pendant decorated with a swallow tail ridge and a bright moon was purchased by an overseas Chinese man from the Philippines. The customer told Wu that he would hang the pendant in his office as a reminder of the architecture and the moon of his hometown.

This year, he also created a special brick sculpture called Yanping Strength to commemorate the 360th anniversary of Zheng Chenggong's recovery of Taiwan island. The special carving has been admired by many experts and local residents.

Wu said the market's recognition of his work has given him more confidence that he will be able to pass down his craft and further develop his pieces, and the current popularity of short videos has also given him new hopes of promoting Minnan brick carvings.

To this end, he has designed a DIY brick carving experience box called Wei Yu Huan Xi (or "Only You are Happy"), which includes an instructional video on the art.

"I hope that more young people will make their own pieces with the knife and red brick contained in the box, and enjoy a sense of creative achievement through my video," he said.