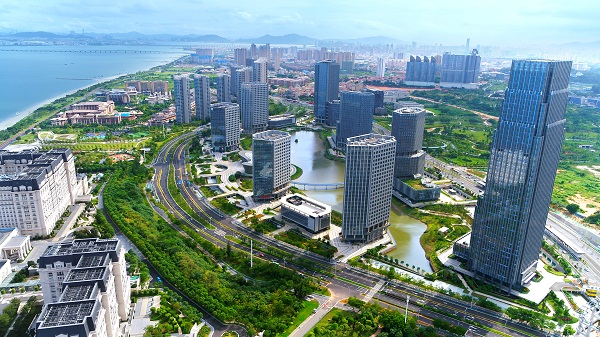 An aerial view of the Xiamen Science and Technology Innovation Park. CHINA DAILY

As the host city of the BRICS Forum on Development of the Industrial Internet and Digital Manufacturing, Xiamen will enhance its advantages and promote cooperation among the BRICS nations of Brazil, Russia, India, China and South Africa, to promote the common development of digital transformation and smart manufacturing, said senior officials at the forum.

The two-day event concluded on May 24 in Xiamen, East China's Fujian province. It comprised a main forum and four parallel forums.

About 300 delegates, including officials, academics, corporate leaders and representatives of international organizations, were invited to share their insights into industrial trends and their solutions for digital transformation.

Going digital will be a clear trend for the next decade, Brazil's ambassador to China, Paulo Estivallet de Mesquita, said at the opening ceremony of the event.

It is also a strong driving force for BRICS members to raise productivity and spur economic growth, he said.

The ambassador expected BRICS nations to draw on each other's experience and foster closer collaboration in industrial internet application in the future.

Li Dongsheng, vice-president of the All-China Federation of Industry and Commerce, said the industrial internet is key to the high-quality development of traditional industries, as it serves as a bridge connecting traditional manufacturing on one end with advanced information technologies on the other.

The industrial internet is offering opportunities and platforms for countries around the world to achieve eco-friendly economic recovery and sustainable development in the new era, Li said.

The alliance should offer services for multinational industrial internet platforms and encourage investment in the field, he said, adding that it will pave the way for a new development pattern featuring openness and integration.

As a highlight of the event, the BRICS Initiative for Cooperation on Digitalization of Manufacturing was unveiled on May 23.

The initiative emphasizes the importance of forging consensus on digital transformation, building more digital infrastructure as well as improving regulations for data security.

It also calls for more efforts to facilitate talent exchanges among the BRICS bloc and create an international cooperation mechanism involving multiple parties such as governments, research institutes, and enterprises.

The host city of Xiamen, for example, reported that 65 percent of its manufacturing devices were digitalized and the penetration rate of industrial internet platforms was 16.3 percent.

In September 2021, the BRICS Partnership on New Industrial Revolution Innovation Center was launched in Xiamen, giving a boost to BRICS countries' cooperation in innovation-driven development and epidemic prevention.

So far, the center has seen more than 30 projects signed, released a list of 60 major tasks and built seven service platforms for key industries related to the new industrial revolution.

Despite the pandemic, 17 training sessions were held via video links or in-person classes. These have reached 28 countries worldwide and received 120,000 visits in total, according to the center.

By the end of 2021, Xiamen was home to 108 enterprises funded by investors from BRICS countries, according to official data.

In addition, 104 businesses in the city were selected as demonstration entities for BRICS cooperation, involving digital manufacturing, green economy and new energy.

The city has also established close trade relations with the BRICS bloc. Last year, its imports and exports with the other four members of the bloc hit 73.78 billion yuan ($10.96 billion), an increase of 20.67 percent year-on-year.