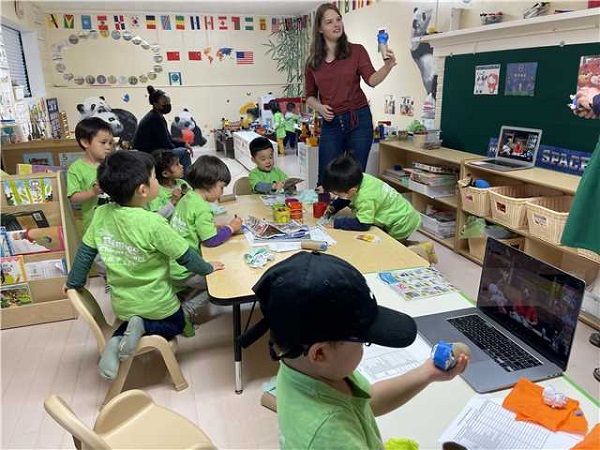 A group of kindergartners learn to paint and assemble puppets when attending an online Chinese puppet demonstration on Thursday at a kindergarten in Portland, Oregon. [Photo provided to China Daily]

Puppet shows have entertained generations of Chinese audiences with their delicate costumes, vibrant character personalities and a wide repertoire of play and music.

On Thursday, this traditional Chinese performance art became the subject of a virtual "course" taught by Fujian puppet masters to American students learning about Chinese culture and language.

"For many in Fujian, puppetry means history, culture and happy memories of our childhoods. I hope our friends in Oregon, both kids and adults, will like it", said Yin Dan, deputy director of the division of American and Oceanian Affairs at Fujian Provincial Foreign Affairs Office.

Emily Chen Palmer, founder of the Oregon-based XSTREAM Learning Center and Bamboo International School, which offer Chinese Immersion programs, said the event is a great opportunity for her students to enrich their understanding of the Chinese culture.

Students embarked on a virtual tour of Zhangzhou Puppet Museum, where they were introduced to the various types of Chinese puppets including shadow puppets, string puppets, rod puppets and glove puppets.

They got a glimpse of the various puppet characters, which sat on shelves of the museum, from the monkey king from the novel "Journey to the West" to characters in "Farewell, my concubine", a classic Peking opera. In addition, audiences saw puppet props such as tiny forms of thrones and knives. They also saw a demonstration of the carving of puppet heads.

To further illustrate how artists manipulate the tiny puppets, artisans put together "Daming Prefecture", one of the masterpieces of Chinese literatures. During the show, the puppeteers made the characters do different stunts, such as somersaults and swinging the silk sleeves to express the emotions of the characters.

Just like the actors on stage, to which splitting of the legs is a basic training, puppeteers need to practice the splitting of their fingers, said Chen Lihui, provincial inheritor of puppet performing art, said during "a hand exercise".

The index finger of a puppeteer controls the head of puppet, the three other fingers control one hand of the puppet, while the thumb controls another hand, he added.