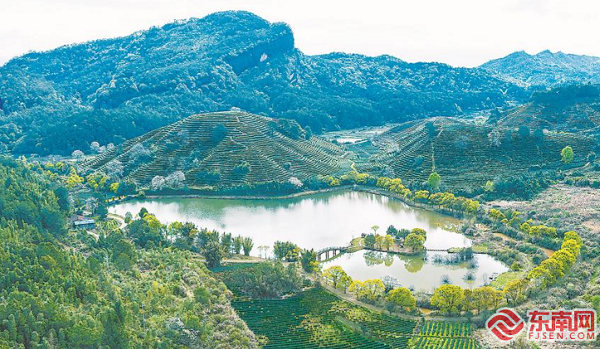 A bird's-eye view of core scenic area of the Wuyishan National Park in Fujian province. [Photo by Lin Xi/fjsen.com]

Fujian province has deepened institutional reform, accelerated the construction of national parks as the major body of the nature reserve system, and increased man-environment harmony in just one year of development.

In October 2021, the Wuyishan National Park was proclaimed as one of China's five national parks.

According to a survey on the park's biological resources background since April 2021, the Wuyishan National Park officially reported six new species in January, bringing the total number of species to 11.

Wuyishan National Park also adheres to the strictest environmental regulations. According to Lin Yaqiu, the director of the park's administration, it has a 210.7-square-km area of unspoiled primary forest vegetation, which is a vital area for world biodiversity protection.

Wuyishan is also known as the cradle of oolong tea and black tea. In order to maintain the tea industry – a pillar industry lifting local people out of poverty, Wuyishan National Park explored a new practical way, which is building an ecological tea plantation, to balance ecological protection and sustainable development of the tea industry.

For the past year, Fujian province has focused on the development of ecological civilization, resulting in the creation of 39 reform initiatives and practices that will be promoted and replicated across the country.