Nature teacher finds his love and home on Pingtan Island 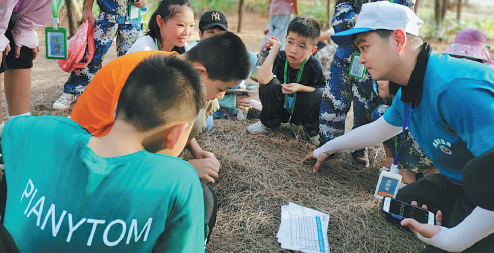 In his outdoor clothes and wide-brimmed hat, Cheng Sheng-chung works as a nature education teacher and environmental volunteer on Pingtan Island off the east coast of Fujian province.

The Taiwan resident arrived on the island in search of work four years ago. Along the way, he married a local environmentalist and started a career in nature education.

Known as "forest teacher" by the children, Cheng frequently takes his students into the wild to learn about different plants.

One of the species he teaches about is the Pingtan beefwood, a deep-rooted tree known for its hardiness and ability to resist droughts, sandstorms and salinization.

He also tells them about the ways it contributes to Pingtan's environmental protection. The planting of a beefwood shelterbelt has eased the effects of sandstorms that used to plague the island and helped improve the environment.

"If the children don't understand nature, they won't respect or protect it. They should understand that humans are not above nature, but must live in peace with it," he said.

Cheng learned to respect nature as a child.

"Having grown up in mountains, I know all too well the joy of being close to nature," he said.

Until he was 6, he lived with his grandmother in the mountainous area of Dakeng in Taichung, Taiwan. When she went out to tend to the fields, he would go with her and play with mice and snails until it was dark.

Later, Cheng moved to downtown Taichung with his parents. Although he'd left the mountains, he found solace in a museum of natural science, where he spent his holidays.