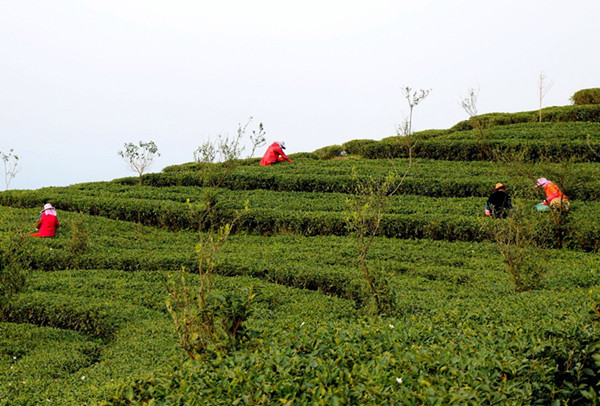 Li Zhaotie has built a good life for himself and his family through the cultivation of white tea.

The 45-year-old farmer from Fangjiashan village, Fuding city, Fujian province, started growing the crop in 2011 as part of a poverty alleviation program supported by the local government. Now, he runs a 12-hectare tea base in his village.

Using income generated by sales of the tea, Li built a six-bedroom house two years ago, and his lifestyle has continued to improve.

However, things were very different before. "My family was very poor when I was a kid. Sometimes we didn't even have enough food to feed ourselves. So when I was 15, I started moving to other cities to earn a living," he said.

"Even after 20 years outside, the low income meant I still wasn't making enough money, so I came home to start a tea business."

Growing the crop has changed his life, he said, adding that he believes the business will help more people like him live better lives amid the country's efforts to promote rural vitalization.

In the past decade, Fuding's white tea industry has flourished and is now worth more than 10 billion yuan ($1.5 billion) a year.

Approximately two-thirds of the city's population works in the industry, which has helped lift many people out of poverty.

The COVID-19 outbreak forced many local tea companies to embrace the opportunities offered by e-commerce.

Fragrant Tea, one of the local leaders in e-commerce sales, hosts livestreams by trained anchors almost every day on e-commerce platforms. Last year, its sales skyrocketed to 82 million yuan, mostly from online business.

From 2015 to last year, about 452,000 impoverished people in Fujian's rural areas were lifted out of absolute poverty as a result of targeted measures taken by the local government.

The development of industry and agribusiness has been one of the important approaches authorities have used to eradicate absolute poverty.

For example, the county government launched a pilot project in its Tongxin Economic Development Zone－which houses 105 businesses－with a total investment of nearly 10 billion yuan. That has created more than 600 jobs for local people, Huang said.

"Modern agriculture has been developed in Zhenghe, which has helped boost the job prospects of poverty-stricken people," Huang said.

"Relying on its distinctive crop, Zhenghe has set up five high-quality tea-processing companies. They have made Zhenghe White Tea a renowned brand across the country and benefited more than 1,000 impoverished households."

The county has also made great efforts to boost its bamboo industry and nurture the whole industry chain, which has helped lift more than 600 impoverished families out of poverty, according to Huang.

In Xingxi, another township in Zhenghe, rural tourism has brought prosperity to local farmers. Nianshan, a village renowned for its vast terraced fields, is one of the beneficiaries.

Using the unique natural landscape, the local government has beefed up efforts to develop rural tourism in recent years by investing more than 30 million yuan to renovate the infrastructure and turn the impoverished village into a tourist attraction.

Wei Jing, Party secretary of Nianshan, said the village has almost 107 hectares of terraced fields, which are long and narrow.

"The increasing popularity of Nianshan's terraced fields attracts many visitors every year," Wei said, adding that the number rose to more than 300,000 last year.

Like many other places in the province, Xiadang, once a poverty-stricken township in Ningde city, has introduced advanced technology and new business models that combine companies, cooperatives and households in tea farms, thus ensuring the quality of the tea and raising farmers' incomes.

During an inspection tour of Fujian in March, President Xi Jinping called on the province to step up the promotion of rural vitalization by developing distinctive industries with a competitive edge. "In the past, the tea industry was a pillar in your fight against poverty, and it should become a pillar industry of rural vitalization in the future," he said during a visit to an eco-friendly tea plantation in Wuyishan city.

As China has eradicated absolute poverty in rural areas nationwide, it has made boosting momentum for rural vitalization an urgent task in efforts to achieve the goal of national rejuvenation and build itself into a modern socialist country.

To help achieve this goal, Fujian has devised a comprehensive plan to pursue a path for the development of agriculture and the countryside, identifying the goals, tasks and priorities for its rural vitalization efforts in the coming years.

A document released by the Fujian Provincial Committee of the Communist Party of China and the Fujian government on March 17 said the acceleration of agricultural modernization will have huge significance for the province's high-quality development. That means priority should be given to issues related to agriculture, the countryside and farmers when addressing the problems of unbalanced, inadequate growth.

It added that there is an urgent need to strengthen weak links in the innovation capacity of agricultural technology, the shortage of professionals in countryside and in rural infrastructure and public services.

Moreover, efforts should be made to promote coordinated development between rural and urban areas, it said.

The document also underlined the importance of agricultural development in building a new development paradigm. It also said efforts should be made to improve the market system in rural areas, expand demand in the countryside and facilitate the free flow of resources between rural and urban areas.

It also stressed the need to boost integrated development of the industrial, agricultural and service sectors in rural areas to improve the quality, efficiency and competitiveness of agricultural development in the province.

Local farmers are upbeat about the prospects of rural vitalization as the central government has committed to mapping out policies and steps to boost the development of agriculture and the countryside.

Li Jixing, who owns a small business in Taining county, dreams of contributing to the vitalization of his hometown by developing tourism and growing exotic flowers.

Taining's climate is mild and humid throughout the year, which makes it suitable for the cultivation of orchids.

Last year, Li rented greenhouses covering more than 1 hectare to grow oncidium orchids. "By developing the flower business, I hope to create jobs for local farmers and train them in planting skills," he said. "I believe that with the support of national policies to benefit farmers, the countryside has a very promising future."