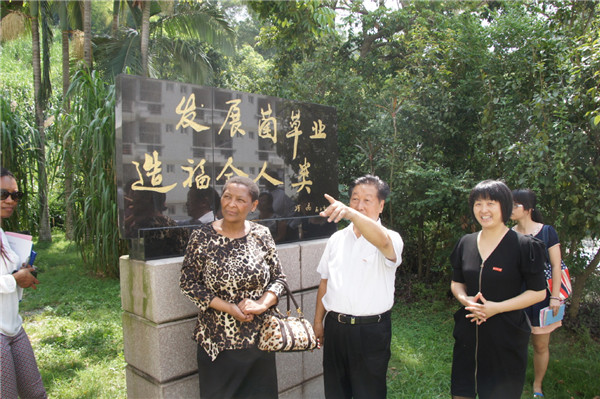 When Lin Zhanxi first introduced mushroom cultivation to the Gobi Desert residents of Ningxia Hui autonomous region in the 1990s, he did not expect a success so phenomenal that it would later feature in a hit TV series.

The inventor of juncao, a method that uses chopped grass as substrate for growing edible and medicinal mushrooms and as forage for livestock, has long been committed to expanding the use of the method in poverty alleviation.

The TV drama Minning Town, which portrayed Lin's quest to introduce farmers from Xihaigu, one of China's least habitable areas, to cultivating edible fungi as a way to increase incomes and stabilize moving sand dunes at the same time, topped the weekly charts for Chinese-language TV series and has become an online sensation for its vivid narrative.

"I was born in a poor, rural region, and I know exactly the hardships that farmers are going through. That's why lifting them out of poverty has been a long-cherished wish," he said.

In the 1980s, as a professor at Fujian Agriculture and Forestry University, Lin decided to experiment with using grass instead of logs to grow mushrooms because timber was not readily available for many rural households. In 1986, he succeeded, and his method was adopted by 51 counties in Fujian province.

In April 1997, Lin brought six boxes of grass seeds to Ningxia after juncao was made one of the key projects in the pairing-off cooperation between Fujian and Ningxia.

Lin said he was shocked by the material deprivation he witnessed. "I've never seen an ecosystem like it. It was barren, like the Sahara," he recalled.

Before being moved into modern homes, many of the farmers had lived in cave dwellings, which have been abandoned. Lin encouraged the farmers to use them for growing mushrooms and later helped them sell their crops to other areas. The project increased the farmers yearly income by 4,000 yuan ($620) to 7,000 yuan that year.

Twenty years on, the program remains one of the most successful of all pairing-off projects between the two regions, with over 20,000 rural households in Ningxia still devoted to mushroom cultivation, bringing in an average income of about 10,000 yuan per year.

Ningxia was only the beginning.

Thanks to its success, juncao was promoted in 506 counties across China and introduced to 106 countries around the world, with demonstration centers set up in 13, among them Rwanda, Fiji, Papua New Guinea and Lesotho.

Lin has traveled to several Pacific island countries to promote the method to farmers, many of whom were still at the tribal stage, and followed subsistence farming practices like slash-and-burn farming.

In Papua New Guinea, an estimated 40 percent of the population lives on less than $1.25 a day. Juncao and dryland rice cultivation methods introduced from China have improved the living standards of about 5,000 households.

Maria Fernanda Espinosa Garces, president of the 73rd Session of the UN General Assembly, told a high-level UN meeting in 2019 that juncao is in line with the 2030 Agenda for Sustainable Development, and is an important contributor to a number of the agenda's goals, among them poverty eradication, clean energy, gender equality and preserving biodiversity.

"Through juncao technology, China has a great story to tell, a story now shared with over 100 countries that have benefited from this innovation. The spark lit in Fujian has shown the potential of a single innovation, if nurtured and deployed wisely, to change lives and improve livelihoods across the world," she said.

According to Lin, the key to the method's success is that he and his fellow researchers have simplified the technique so that farmers are able to easily understand it and succeed with their first attempt.

Even at 78, retirement is not a consideration for Lin. He is exploring the potential of juncao in animal husbandry, ecological restoration and the making of biological materials.

Since 2013, he and his team have been experimenting with the use of the method to reduce wind speeds and stabilize moving sand in the Alshaa League in the Inner Mongolia autonomous region.

"The worsening of the ecology often goes hand in hand with increasing poverty, and so in the end, my dream is for juncao to work on creating a better ecosystem," he said.

"I feel I have a new mission to shoulder, even after China wins its battle to alleviate poverty. I can still foresee the importance of juncao in helping farmers continue to improve their situation and in improving the ecology and the environment."