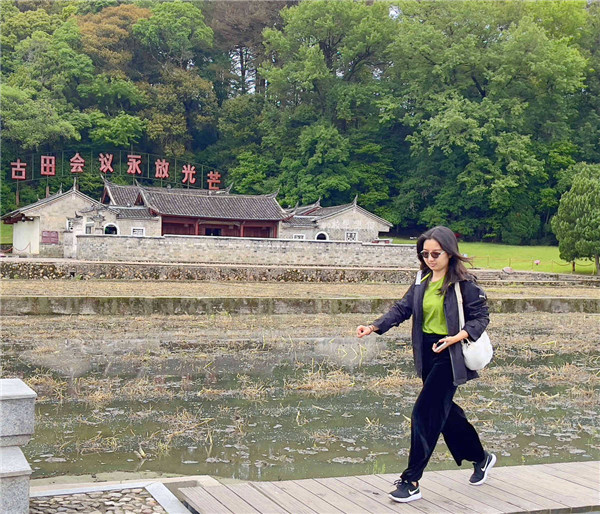 The Site of the Gutian Meeting, located in Gutian township of East China's Fujian province. [Photo by Hu Meidong/chinadaily.com.cn]

Dressed in army uniform, Lai Jinhua, a tour guide of the site of Gutian meeting, has been shuttling to flocks of visitors to tell them the historical stories of the Red Army.

Born and raised in Gutian township of East China's Fujian province, the 35-year-old has worked in the Gutian tourism site for six years.

"Only after I became a tour guide I started to learn about the historical meeting, and understood the difficulties the Communist Party of China experienced in the early days, as well as its spirit of never giving up," Lai said.

In March 1929, the Fourth Army of the Red Army led by Mao Zedong marched to Fujian province, trying to establish a new base for revolution. To ensure the success of the Party and the army, Mao and other Party leaders presided over the ninth Party conference of the Fourth Army in Gutian, which was known as the Gutian Conference.

During the meeting, Mao and other leaders agreed that the army must be led by the Party and it is the people's army as it is from the people and for the people.

Lai's job is to tell the history and detailed stories behind to make visitors better understand the "red culture".

It took her a month to remember all the details, she said.

She realized later that to remember the words requires clear and thorough understanding of the background.