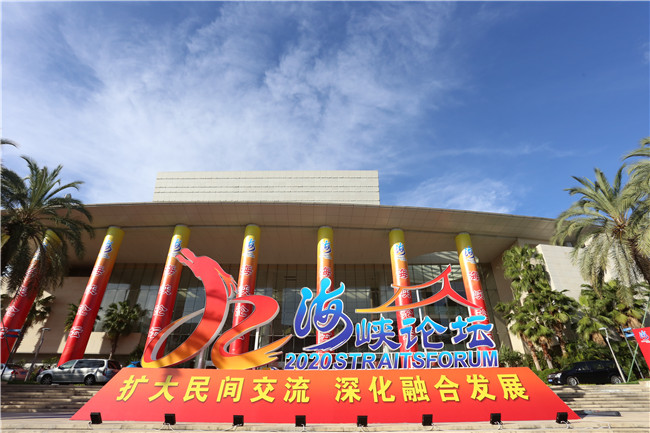 The 12th Straits Forum, the largest platform for people-to-people exchanges across the Taiwan Straits, kicks off in Xiamen, East China's Fujian province, on Sept 19. [Photo by Chen Bo/people.com.cn]

Trade between Fujian and Taiwan expanded 10.9 percent year-on-year last year, and the actual use of Taiwan capital in Fujian saw a year-on-year growth of 77.3 percent, according to a government work report delivered on Jan 24 at the annual session of the provincial people's congress.

Over the past five years, Fujian has been committed to building itself into an attractive place for Taiwan people, and more than half of Taiwan’s large-scale enterprises have invested in the province. Fujian's agricultural sector used more Taiwan capital than any other sector on the Chinese mainland.

As the closest mainland province to Taiwan and a pilot zone for cross-Straits cooperation, Fujian has made notable achievements in deepening integration with Taiwan over the years.

In 2020, it made strong progress in integrated development with Taiwan, and a number of major cross-Straits events were held in the province that year, including the 12th Straits Forum and the annual conference of the Cross-Straits Entrepreneurs Summit, all of which have strengthened cross-Straits economic ties, cultural exchanges, and communication between young people on both sides.

Fujian has also explored new ways to promote further integration with Taiwan, and has worked to ensure that people from Taiwan enjoy the same treatment as mainlanders when they study, do business, work, or live in the province.