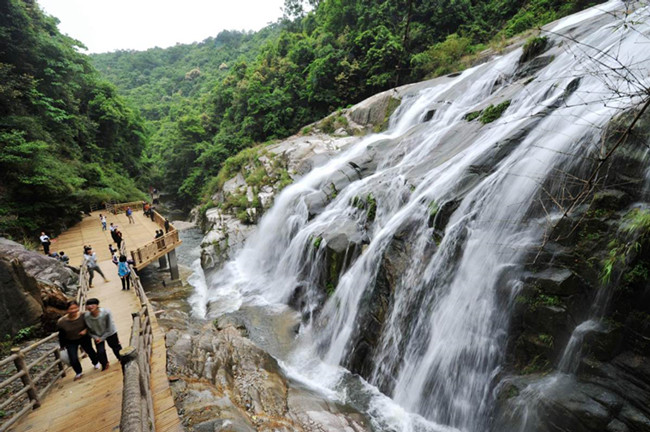 People in Wuping county, in Fujian province, are living proof of that adage as their lives become more prosperous thanks to environmental protection.

In the 1990s, locals simply cut down trees and sold the wood to earn money. But excessive deforestation prompted the local government to reform the collective forestry ownership system in 2001 and distribute resources to individuals, a move endorsed by President Xi Jinping, who was governor of Fujian at the time.

In June 2016, Fujian was approved as a national-level demonstration zone for ecological civilization, which aims to strengthen economic and social progress while protecting or improving the environment. The provincial government made green development a priority.

Wuping has set an example by establishing a government-backed credit guarantee company that specializes in forestry evaluation, management and disposal. It helps residents use their forestry assets as collateral to obtain bank loans so they can start businesses related to the sector, such as fungi growing and forest tourism.

The move has succeeded in raising living standards for people in mountain villages and improving the local environment.

From 2001 to last year, 28,840 hectares of forest were planted in the county, and the density of trees growing in its forests nearly doubled, according to the county's forestry bureau. Wuping's forest coverage reached 79.4 percent last year.

Some 100,000 hectares of forest land have been used for developing eco-friendly businesses, such as bee farms and the growing of lucid ganoderma－a mushroom commonly used in traditional Chinese medicine.

The output of those businesses is expected to be worth 3.65 billion yuan ($555 million) this year, up nearly 7 percent year-on-year, forestry bureau director Zhong Dachang said.

Wei Taihong, the owner of Hongtai Family Farm－one of the county's biggest lucid ganoderma farms－said many people like him are becoming prosperous thanks to the area's lucid waters and lush mountains.

Wei, 46, worked at a handicraft factory in Xiamen, Fujian, after graduating from junior high school in the 1980s. In 2008, he returned to Wuping and sensed the potential of the lucid ganoderma business.

"With people's increasing awareness of the importance of health, nutritional food and other healthcare products will see a bright future," he said. "The climate in Wuping is perfect for the growing of lucid ganoderma and the business will definitely be profitable."

"We also encourage local residents to fully explore the potential of the county's natural resources and develop eco-friendly tourism by taking advantage of our beautiful natural scenery and great environment," Zhong said.

Wuping has 54 natural scenic spots and 80 family inns in the forests. Forest tourism is expected to attract 2.7 million visitors this year and earn residents 1.1 billion yuan.

Per capita income in Wuping from the forest economy hit 4,750 yuan last year, 12 times more than in 2001, and the forest economy contributed 26.6 percent of rural residents' disposable incomes, an increase of 10 percentage points compared with 2016.

"Wuping is now well-known in Fujian for its beautiful forests, which have also become a treasure for local people," Zhong said. "We will maintain the harmonious relationship between people and nature, further boosting the growth of the green economy."