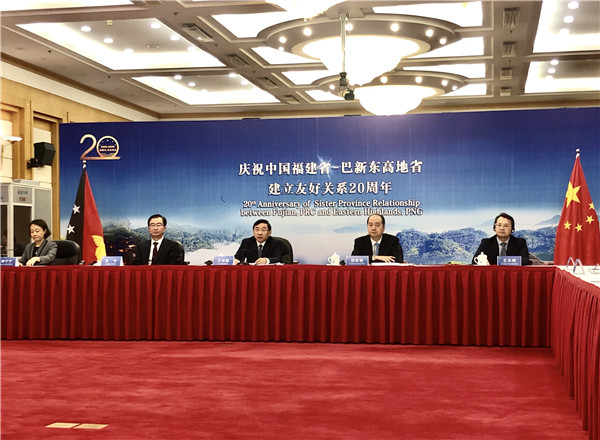 An online activity is held on Nov 11 to celebrate the 20th anniversary of the sister province relationship between Fujian and the Eastern Highlands province in Papua New Guinea. [Photo by Hu Meidong/chinadaily.com.cn]

East China's Fujian province will continue to deepen sister province ties with the Eastern Highlands province, Papua New Guinea (PNG) in areas of agriculture, business and trade, culture and education, according to an online activity held on Nov 11 to celebrate the 20th anniversary of the sister province relationship between the two sides.

The activity was broadcast via live stream and attended by a number of government officials from both parties.

Fujian and Eastern Highlands province have maintained a fruitful partnership over the past 20 years. One of their key projects is the mushroom and upland rice project launched in 2000 which aims to promote the cultivation of upland rice and a type of grass called "juncao", also known as "China grass" by the natives, according to Don Sawong, PNG ambassador to China.

He added that China is one of the largest trade partners of PNG, and that bilateral trade between the two countries has achieved strong growth over the past years. Statistics show that PNG now has more than 40 large Chinese enterprises that have provided employment to many locals and contributed to economic and social development.

Peter Numu, governor of the Eastern Highlands province, said that he hopes the two provinces can engage in beneficial dialogue regarding the development of infrastructure such as roads and bridges, rural electrification, telecommunications, education, water supply, sanitation and rural housing.

During the online activity, a five-year cooperative agreement was signed to further promote the development of "juncao" and dryland rice technologies in the Eastern Highlands province.