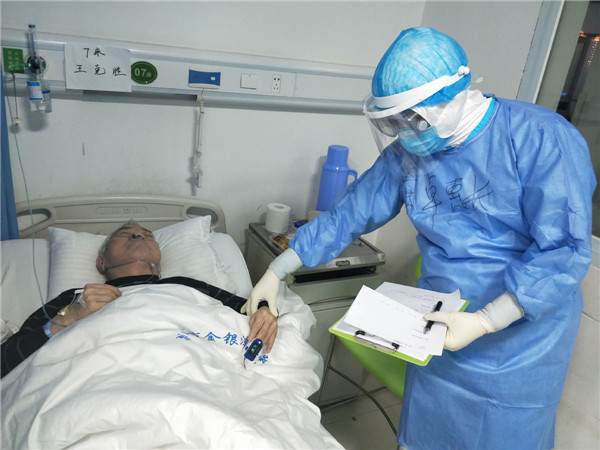 Zhuo Huichang checks a COVID-19 patient's condition while making a round of the wards in a hospital in Wuhan, Hubei province. CHINA DAILY

Physician from Fujian worked in both Wuhan and the Philippines

For Zhuo Huichang, a doctor from Fuzhou, Fujian province, his battle against COVID-19 spanned three months and two countries.

On April 5, he joined a Chinese team of 10 medical experts sent to the Philippines after he had a lengthy stint on the front line fighting the novel coronavirus in Wuhan, Hubei province.

"The epidemic knows no borders and humanity is a community with a shared future," he said of his decision to work in the Philippines. "I could share my clinical experience with the foreign medical peers and contribute to the global fight against the epidemic."

A senior doctor in the critical care department at the First Affiliated Hospital of Fujian Medical University, he boarded a plane to Wuhan on Jan 27 with his colleagues. At that time, Wuhan was the epicenter of the coronavirus outbreak in China.

In 2003, during the severe acute respiratory syndrome outbreak, Zhuo was disappointed he could not join the fight as he was still an intern.

But when COVID-19 took hold, he knew he had the medical knowledge and skills to make a difference.

"The outbreak this time was like a war. When the situation was uncertain and urgent, some of us had to stand up and be counted," Zhuo said.

He realized the situation was much more severe than he had expected when the team arrived in Wuhan and discovered many medical staff were infected with the virus.

Zhuo said when he saw the desperate conditions the patients were in he was overwhelmed by emotions.

During their two-month stay in Wuhan, Zhuo and his team worked at two hospitals. "I was proud of my team's performance. Almost every patient we were responsible for recovered," he said.

Zhuo and his colleagues also wrote a 100,000-word handbook on the diagnosis and treatment of COVID-19 and protection procedures for medical workers.