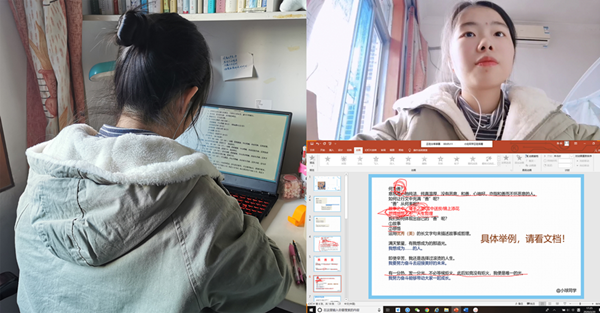 Student volunteers from Fuzhou University in Fujian province are tutoring children of medical workers combating the coronavirus on the front line in Wuhan, Hubei province.

According to the university, more than 1, 300 volunteers joined the tutoring service within eight hours after the school launched the project on Feb 10 in a bid to help children of medical staff from Fujian province battling the coronavirus outbreak in Wuhan.

As of Tuesday, 2,011 students, among which 402 study at the graduate school, had volunteered to participate in the project, said Fuzhou University.

Students taking part in the volunteer service, which includes homework tutoring, extracurricular activities and psychological support, are rigorously trained and prepared for classes and teaching, said the university.

"We want to pay our respect with the tiny bit we can do for medical workers who sacrificed their families for the collective," said Chen Yuhong and Liu Lulu, two volunteers.

Chen said she once asked the child she was tutoring if the youngster was reluctant to see her parents leave for the front line. The girl responded there was nothing she could do though she was reluctant. "She is very sensible, which makes me feel my work is meaningful," Chen said.

"In my first class, the girl fell asleep. But later I found out that was because everyday she kept waiting for her father's call until very late," said Liu.

Liu said she has received a call from the girl's father, who thanked her and said he could now work more securely on the front line.

"My mother is a doctor working in Wuhan, so I can feel what these kids feel. As their big sister, I want to teach them to be strong-minded," said Hu Qing, a volunteer tutor.

Lin Jing, a nurse from Fujian's first medical team dispatched to Wuhan, found Liu Yuan, a student from Fuzhou University, to help her son with his studies.

"I have joined volunteering services many times, but this time it's different as we help to relieve medical workers' burdens so that they can save lives without worrying about their children and families," said Liu Yuan. "Though I'm not on the front line, I still want to contribute my efforts to this fight," she added.

Xiamen University also set up a volunteer platform formed by students to provide medical workers' kids with academic tutoring, mental help and anti-epidemic knowledge. So far it has attracted over 200 helpers attending to more than 100 children.

Huang Siyu contributed to this story.