Heart-shaped banyan tree will be preserved in ancient Sanfangqixiang district 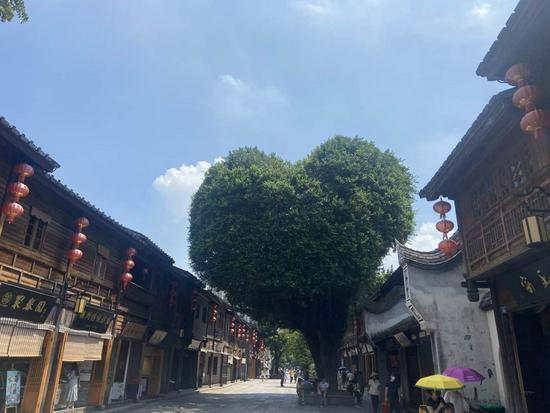 A banyan tree that naturally grows into the shape of a heart at the Sanfangqixiang historical and cultural area in Fuzhou, capital of Fujian province, has gone viral recently. Sanfangqixiang, also known as the district of Three Lanes and Seven Alleys, is a popular tourist destination.

"To preserve the ancient tree and the overall historic scenic area, we planned not to give much development to the heart-shaped tree," said a staff member of Fuzhou Gucuo Group, which is in charge of the protection and development of Sanfangqixiang.

When you raise your head unintentionally, probably you will be surprised to see the heart-shaped tree, the staff member said.

Sanfangqixiang, covering an area of 40 hectares, is named after the well-preserved ancient city spanning three lanes on the west and seven alleys on the east. The area hosted many Chinese celebrities, among them the famous scholar Yan Fu (1854-1921) and writer Bing Xin (1900-1999) as well as Lin Zexu (1785-1850).