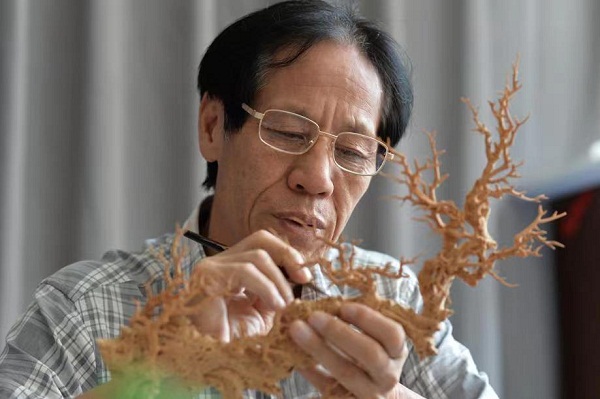 Chen Junkun, one of many cork carvers in Fuzhou, Fujian province, was really excited when he got the news about regulations protecting Fuzhou cork carving techniques. The rules take effect on Nov 1.

Cork carving, in which landscapes are sculpted in the bark of cork trees, is considered one of the three art treasures of Fuzhou, along with soft stone carving and lacquer work. It was listed as a national intangible cultural heritage in 2008.

Under the regulations, some famous historical and cultural blocks in the city will be designated for the sale of cork carvings. Special display areas will be set up in the city’s museum, cultural heritage exhibition hall and other public places.

Cork carving is said to have originated in the city in the early 20th century, when an official returned from an overseas trip with a Christmas card carved into cork and gave it to local woodcarvers, who, after studying the object, developed intricate ways to create Chinese landscapes, including pavilions, pagodas, trees and mountains.

After decades of development in the city, the art saw its most brilliant period in 1970s and 1980s, Chen said, adding that more than 20,000 employees were involved in industries related to cork carving at that time.

"A cork carving was a local resident's first choice for a wedding or birthday gift," he said. "Moreover, a large number of the carvings were sold in more than 30 countries and regions worldwide, with an annual output value of around 50 million yuan ($7.74 million)."

However, overseas markets shrank in the 1990s and the province’s battered cork carving industry failed to recover. Many masters chose to retire.

"Nowadays, no more than 50 people stick to the traditional skills, and only a dozen of them can be called masters," he said. "Most are middle-aged or seniors over 50. There is a serious talent gap for inheriting the skills."

"We are hoping to see a new spring of the art with technical innovation and support from the whole society," he said.