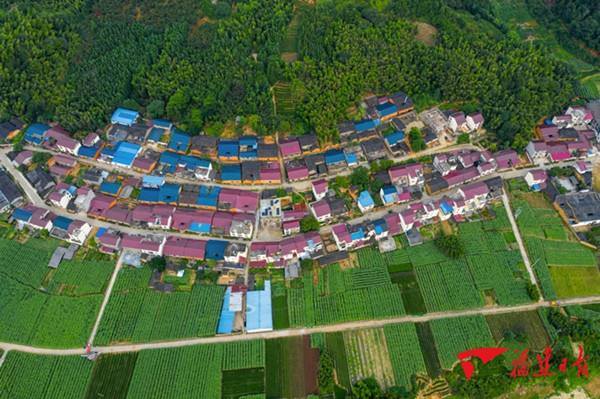 Located at the border of Fujian province and Zhejiang province, Songxi county was lifted out of poverty in 2019 and completed the tasks of building a moderately prosperous society in all respects in 2020.

Relying on its rich history and superior ecological conditions, Songxi county has vigorously developed greener industries, as well as successfully launched the "One Village, One Product" campaign. Products in Songxi county like Jiulong white tea, Songxi Century sugarcane, and Changxiang grapes have become well-known at home and abroad.

Reporters from major media outlets visited the county's agricultural tourism and creative park, Chaping ecological demonstration tea garden, and Wanqian village, which is known for its cultivation of Songxi Century sugarcane, to see firsthand Songxi county's implementation of the New Development Principles, as well as its commitment to green development and rural revitalization.

The agricultural tourism and creative park is located in Xiaduan village, Songxi county. It is planned to build a spatial development pattern with an ecological agricultural planting area, a characteristic industrial base, leisure and sightseeing facilities, a green corridor, as well as a photovoltaic landscape. The visualization traceability project and the smart agricultural platform has largely improved its efficiency and centralized management.

Centered on the integration of production and tourism, as well as the integration of primary, secondary, and tertiary industries, farmers have adapted to local conditions and planted Beni Madonna, a rare breed of citrus fruit, Taiwan tropical fruits, rare edible fungi, and organic vegetables. They have achieved large-scale operation and professional production, as well as improved the quality of agricultural products, highlighting regional characteristics and market competitiveness.

The ecological demonstration tea garden in Chaping township is committed to building the tea garden into a cultural park through the construction of a demonstration area and a sightseeing garden. Under the service of the Technical Task Force (TTF), tea planting and manufacturing have been largely improved. By carrying out the construction of a green tea garden and implementing pesticide packaging waste recycling, the quality of tea has been greatly improved. In recent years, all indicators of tea products have reached the national standard.

Wanqian village is under the jurisdiction of Zhengdun town in Songxi county. In recent years, Wanqian village has made use of the unique agricultural advantages of Songxi Century sugarcane and found a distinctive way for rural revitalization with the development of its agriculture industry through science, technology, as well as tourism.

Since 2018, Wanqian village has defined the development direction of "One Village, One Product," and gradually formed a development pattern centered around Songxi Century sugarcane. This village planted nearly 400 acres (161.87 hectares) of Songxi Century sugarcane, and the village cooperative produced nearly 40,000 kilograms of sugar. The villagers planted this sugarcane and realized a per capita income increase of more than 5,000 yuan. The per capita income of villagers currently stands at 12,397 yuan, with an average annual growth of more than 10 percent in the past five years. In addition, the village collective's dividend income reached 150,000 yuan.

In recent years, major economic indicators like financial income, as well as the disposable income of urban and rural residents in Songxi county have greatly increased. The county remains committed to furthering its rural revitalization efforts through greener development.