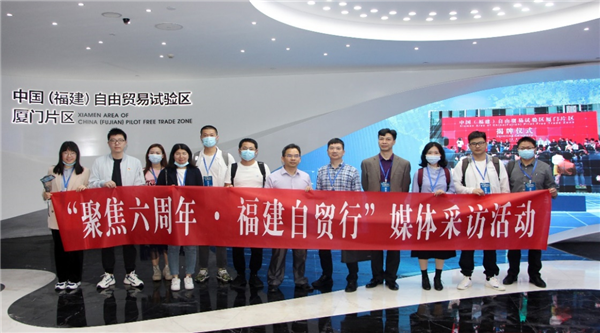 A delegation of reporters visited the Xiamen Area of the China (Fujian) Pilot Free Trade Zone in East China's Fujian province to get an idea of the achievements made by the zone since its establishment in 2015, according to a news report on April 12.

In recent years, the Xiamen FTZ has stepped up its pace in innovation and digitalization. The big data service center in the zone offers a range of services related to customs clearance, smart port, the Belt and Road Initiative, exchanges and cooperation between Fujian and Taiwan, and cross-border e-commerce.

Authorities of the zone said that the center has made a number of innovation achievements such as developing an intelligent port logistics platform, a customs business reservation platform, and an export avionics freight platform.

In addition, a number of key platforms for the development of aviation maintenance, financial leasing, imported wine business, cross-border e-commerce, and integrated circuits have been cultivated, in turn boosting the development of the zone's competitive industries and injecting strong vitality into Xiamen's high-quality development.

Local authorities said that Xiamen is a hub city for international cooperation, and has played a crucial role in enhancing economic and trade exchanges with countries and regions involved in the Belt and Road Initiative.

The China-Europe Railway Express (Xiamen) has grown into a vital logistics channel for ensuring smooth trade and commerce between China and the Belt and Road countries and regions. The train currently operates routes to 12 countries, creating a new international logistics channel by linking the 21st Century Maritime Silk Road and the Silk Road Economic Belt.

"The Xiamen FTZ has introduced many supportive policies, which have delivered much convenience to customs clearance," said Chen Luchao, a manager with Xiamen International Railway Service Co Ltd.

Reporters also paid a visit to the Xiamen Dadeng-Taiwan Small Goods Free Trade Market. Due to its proximity to Taiwan, the market has reported huge growth in trade with the Chinese territory. Last year, 496 million yuan ($75.88 million) worth of duty-free goods, a 45.42 percent year-on-year rise, were imported from Taiwan.