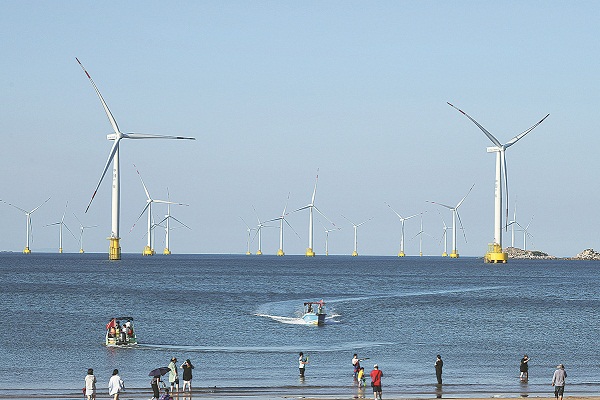 Wind turbines are at work off the coast of Pingtan Island in Southeast China's Fujian province on Aug 21.China plans to advance large-scale and high-quality development of wind and solar power generation as it strives to realize carbon reduction goals, according to an action plan released by the State Council. WANG WANGWANG/FOR CHINA DAILY

Climate adaptation is high on the Chinese authorities' agenda as the nation forges ahead with its ambitious targets of peaking carbon dioxide emissions before 2030 and realizing carbon neutrality before 2060.

China has released two national documents on climate adaptation, with the one issued in 2013 making such action a national strategy for the first time.

In June, 17 departments, including the Ministry of Ecology and Environment, jointly released a new national guideline on climate adaptation, vowing to essentially build a climate-resilient society by 2035, with significant improvements in the ability to adapt to climate change.

By that year, for example, the nation's climate change monitoring and early warning capability will reach an advanced level globally, while the climate risk management and prevention system will basically mature, according to the document.

It added that China will take measures to effectively prevent and control major climate-related disaster risks, and further improve the technical and standard system for adapting to climate change.

Supporting measures related to financial services, technology and international cooperation will be implemented in tandem with "national climate resilience construction", it said.

"Sponge city", another major initiative launched to adapt to climate change, is a national pilot program that aims to reduce urban flooding by constructing facilities to help absorb and capture rainwater for future use.

To date, 50 cities have been covered by pilot programs since 2015, including Jinan, capital of Shandong province, and Wuhan, the Hubei provincial capital.

National legislators are tackling the adverse impacts of climate change by introducing adaptation measures on the Qinghai-Tibet Plateau.

Late last month, the Standing Committee of the National People's Congress began discussing a draft law aimed at conserving the plateau's ecosystem. The document highlighted the rising number of extreme climate events in the region, which it said pose risks of secondary disasters.

The draft law proposes setting up highly efficient systems to cope with and adapt to climate change, as well as preventing and mitigating disasters.

Monitoring and providing early warning of climate change and natural disasters are among the specific measures being introduced.