New projects point the road ahead for region to embrace prosperity 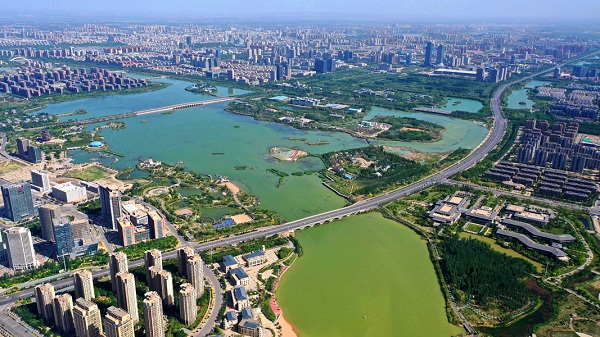 Nourished by the Yellow River, Yinchuan, the capital of Northwest China's Ningxia Hui autonomous region, is latticed by waterways and rich in greenery. [Photo by Li Jing/Provided to chinadaily.com.cn]

A vast green paddy field stretching beyond the horizon in Ningxia Hui autonomous region delights not only the eyes, but also the nose and the mind.

Looking down from a sight-seeing tower in Yudao Kongjian, (which translates as fish-rice space) in Helan county, Yinchuan, the regional capital, visitors view rice plants formed in intricate patterns such as Chinese characters.

Following directives from President Xi Jinping, the region has worked hard to build a pioneering area for ecological protection and high-quality development in the Yellow River Basin.

Liang Yanshun, Party secretary of Ningxia, said at a media briefing earlier this year in Yinchuan: "Ningxia used to suffer from a fragile ecological system that lacked sufficient forest coverage and vegetation. Today, Ningxia is different, as its once-barren mountains now boast flowers and fruit, while its desolate areas have become scenic spots that welcome countless visitors."

China's first national pilot zone has been established on the edge of the Gobi Desert in Ningxia for the development of premium wine in the eastern foothills of Helan Mountain.

Zuo Xinhui, a winery owner in Minning, a resettlement township in the Gobi Desert south of Yinchuan, said the wine industry has become an important economic pillar providing residents with stable incomes and helping them shake off poverty.

The town's name reflects the help that Ningxia (known as Ning for short) has received from Fujian province (known as Min for short) since 1997, when work began on Minning's construction.

Xi, at the time deputy secretary of the Communist Party of China Fujian Provincial Committee, was in charge of Fujian's efforts to help Ningxia.

A solar-agriculture project beside the Yellow River in the region is another example of the progress made in Ningxia.