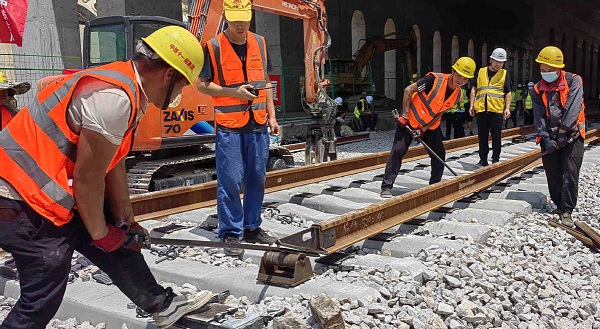 China's first cross-sea high-speed railway line will open in Fujian province between June and September next year, and is expected to promote the development of economically dynamic coastal city clusters in southeastern China, the line's chief bridge designer said.

Track-laying on the 277-kilometer line was completed on Tuesday. Linking the provincial capital Fuzhou with Xiamen, a major tourism and port city, the route will reduce travel time between the two cities to less than an hour. The line has a designed speed of up to 350 km/h, and has eight stations including Zhangzhou and Putian.

The line traverses three newly built cross-sea bridges in Quanzhou, Meizhou and Anhai bays. As the fastest sea-crossing railway in the world, it will take only 98 seconds to pass the 9.5-km Anhai Bay bridge.

The most difficult part of the construction is to ensure the stable running of high-speed trains on the bridges despite the complicated and changing marine environment involving wind and waves.

"In those areas, typhoons occur frequently, and the landscape is complex. Construction had to be done on mud flats and on soft foundations in deep waters," Yan said. "We have to guarantee deformation control on the bridges, especially in big wind, and their corrosion resistance properties in the strongly corrosive marine environment."

The bridges adopted many advanced technologies and materials to tackle the challenge. For example, the team combined a concrete deck slab and steel girders in the two cable-stayed bridges on Quanzhou Bay and Anhai Bay, to decrease deformation. Graphene was used to help bridges resist corrosion for over 30 years, according to Yan, adding that the trains will be able to run at full speed even in winds of 70 km/h.

He said further construction will be focused on communication, signals, electrical engineering and electrification work, as well as the building of other railway facilities such as waiting rooms, ticket offices, restrooms, catering and entertainment spaces.

Gan Mantang, a professor of sociology from Fuzhou University, said the railway will promote the rise of two city clusters with Fuzhou and Xiamen as the centers, and strengthen the key role of the coastal city belt in Fujian's economic development.

Yang Jie in Fuzhou contributed to this story.