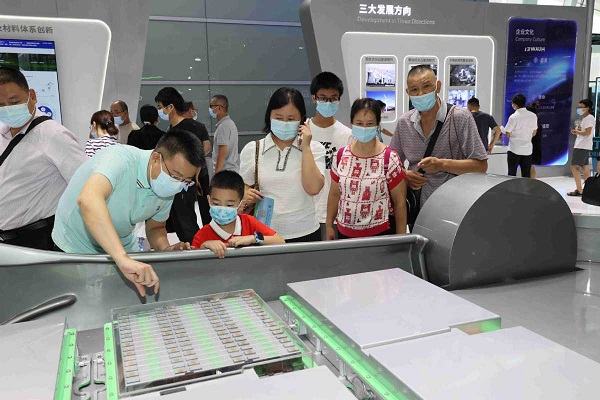 Contemporary Amperex Technology Co Ltd, the world's largest battery maker for electric vehicles, more than doubled its profit in the second quarter, despite rising costs of raw materials and supply chains due to the COVID-19 pandemic.

Though faced with challenges brought by COVID-19, CATL said it has established an information system to track the supply, demand and price changes of important raw materials, and has purchased some in advance.

Through signing long-term contracts with suppliers, recycling materials and negotiating a dynamic battery pricing scheme with automakers, the pressure of rising costs was relieved, it said.

The latest data from the China Association of Automobile Manufacturers showed that sales of China's new energy vehicles soared 115 percent in the first six months to 2.6 million, which also drove a quick expansion of EV batteries.

Another highlight of the company's first-half performance is its rapid overseas expansion. In August, the battery maker invested 7.34 billion euros ($7.5 billion) to build a 100 gigawatt-hour battery plant in Debrecen, Hungary, which is also the second battery plant in Europe following its German factory.

CATL received approval to produce battery cells in its factory in the German federal state of Thuringia in April. The new plant, as its first factory outside of China, has a total investment of 1.8 billion euros.

In June, CATL also confirmed to China Daily that it has supplied EV batteries to South Korea's Kia Corp, which marked the first entry of a non-South Korean battery into the market.

Market consultancy SNE Research said CATL's market share in the global EV battery market reached 34.8 percent in the first half, extending its lead with a 6.2 percentage point increase from a year ago.

"With an anticipated boom in NEV sales globally in the coming years, mainstream battery manufacturers including CATL will no doubt rev up overseas expansion," said Wang Jing, a research supervisor for high-end manufacturing at Shanghai Chaos Investment Group Co Ltd.