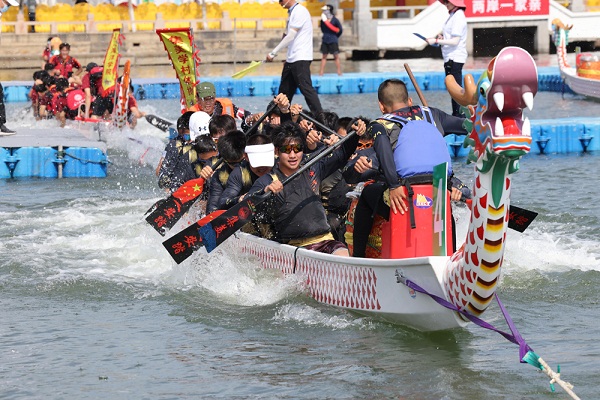 Contestants take part in a tug of war at the 2022 Cross-Straits Dragon Boat Race on Thursday in Xiamen, Fujian province. FENG YONGBIN/CHINA DAILY

Whipping up furious sprays of water, dragon boat crews and their helmsmen faced off against one another, paddling in rhythm to the constant beating of drums in the finals of the two-day 2022 Cross-Straits Dragon Boat Race held in Xiamen, Fujian province.

The race, which ended on Friday, coinciding with this year's Dragon Boat Festival, attracted 24 dragon boat teams from the mainland and 17 from Taiwan, and served as a platform for people on both sides of the Straits to take part in exchanges.

The men's and women's teams of Jimei Street, Xiamen, took the top spot in the final of the 300-meter race.

The Taiwan contingent were those who are studying or working in Fujian, and for many it was the first time they'd paddled a dragon boat. And as for many Chinese, it's an indelible way to celebrate the annual festival, which belongs to the shared culture across the Straits.

"As an absolute amateur, I've often had an aching back and bum after training. But I've gradually improved my technique."

After visiting Xiamen in August, her first visit to the mainland, she decided to start up her own business in the city.

"Xiamen's local culture is much the same as that of Taiwan. The locals are very hospitable, especially when they find out that I'm from Taiwan," she said.

She shares her daily life in Xiamen and her visits to other cities in Fujian province on short-video platform Douyin, introducing the local food and scenic areas.

Masha also talks about her personal feelings on the culture across the Straits in her short videos.

Back in her hometown, each year she either watches dragon boat racing with her parents on television or attends events in person. She said that in Pingtung, paddlers have to grab a flag when they reach the finish line to decide the winning team.

"I enjoy the festive atmosphere of the Dragon Boat Festival here," said Chan Bing-xi, 32, from Taipei. "It's my first time to paddle a dragon boat and now I really realize the spirit of the sport is that unity is strength."

He's from a dragon boat team consisting of those from Taiwan working in Fuzhou, Xiamen, Quanzhou and Zhangzhou.

"I've worked in Zhangzhou for five years and often feel connected because of the shared culture across the Straits," he said.

Lai Shu-jen, together with three others from Taiwan working in Xiamen, not only participated in the dragon boat racing, but also performed a pair of songs on stage as part of the festive event.

In an original song created by Lai, they recited lyrics and rapped in the southern Fujian dialect of Hokkien.

"We want to communicate across the Straits with music, and promote Chinese culture in a way that mixes both Chinese and Western styles," she said.

The Dragon Boat Festival commemorates the death of Qu Yuan, a patriotic poet from the State of Chu during the Warring States Period (475-221 BC).

Tang Yonghong, deputy director of the Taiwan Research Center at Xiamen University, said the essence of the Dragon Boat Festival is one's devotion to family and country.

"It's important for people from across the Straits to communicate with each other to enhance mutual understanding and build a common spiritual home," he said.